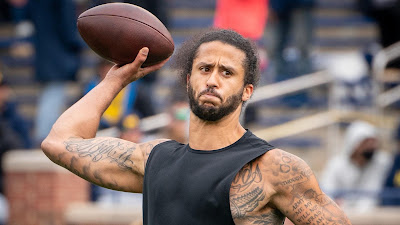 I doubt any of you follow Cleveland sports. Hell, I live here and I barely do.
Cleveland Browns, the football team for those who don't know, have rarely kept a quarterback for a full season. Each one a trainwreck in their own way.
Our newest QB is, without a doubt, the biggest of our fuck-ups........and he hasn't even played a game yet - and quite honestly, might never.
With full prior knowledge, the owners and coach signed some dick name Deshaun Watson. At the time of his draft, he had 22 (!!!!!) sexual harassment and / or rape charges filed against him.  He's 26 - so if he started raping women at birth, that's slightly less than one per year.
Since he got drafted, at least two more women have come forward.
Now the owners of the team are married. I get that Jimmy Haslam is probably the Robert Kraft of the AFC, so he probably thinks some poor woman who works at Massage Envy deserves what she gets.  But Dee, his wife, clearly picked the almighty dollar over 24 women.
Oh - and they drafted him knowing there would be suspensions of games, where he'd get paid but not play. They took that "risk" figuring it would be a possible year of doing nothing and it was still worth a year of his - get this - $230 MILLION dollar contract.
Now, why would Watson stop doing what he's doing?  He's not only gotten away with it, he's been rewarded for it. The NFL LOVES this behavior.  They are more than willing to talk about 'good conduct', but words and deeds are different.  That is why the NFL has hired and rehired murders, dog fighters, rapists, spousal abusers, alcoholics and drug users.
You just can't kneel.
But that brings me to Colin Kaepernick.
The man was blackballed for kneeling during the National Anthem in support of BLM. That's the short version.
With the prospect of Watson being out for 2022-23, the Browns need a starting quarterback. I guess, 2nd, 3rd and 4th string players are there for their looks and to give locker room blowjobs?
Rumour has it that Kaepernick is being considered for the interim position.
Me? Personally?  I LOVE it.
I think the town will revolt over such a might-be selection.
Fans will abide having a serial rapist on a team, but would riot at the thought of a black man standing up for the black population by peacefully kneeling.  Because, THAT is disrespect.
I own zero Browns gear. Never have owned a thing. If Kaepernick came, I'd be the first in line to plunk down $243 for a jersey*.
*I just assume that's what team gear would cost.
Song by: Adele
Posted by Blobby at 12:07 AM

That would be quite the publicity stunt, given that Kaepernick has not played since 2016. But if the Browns signed him and actually won games then that would be amazing. (I was going to write "started winning games" but I guess they made the playoffs in 2020? Who knew?)

If he’s hired on merit and can carry the team, great. He isn’t owed anything for his politics . I think he’s Nike funded anyway. Everybody loves a winner and in American sports culture will absolve them of anything short of murder and perhaps being Gay.

A man kneeling for his convictions loses his job, but a rapist gets a $230 million payday?

Shows you all you need to know about what America values.

I wasn't aware Cleveland has a pro football team, no that's not right as it was hard to get to the water one day as there was a game going. That must have been the football.