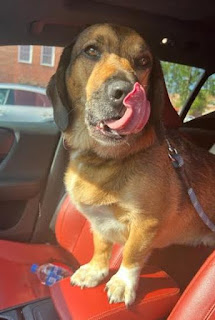 It's hard to believe, but Shep turns seven today.
He is such an integral part of the family it's ridiculous. As you already know, he and his sister hogs 1/7th of each week's blog posts.
Between the pandemic and us being only semi-social anyway, this guy takes front and center on how we craft our non-work lives. We tell him weekly that he'd never have found a better home.
And I'm not sure he would have.
The word 'spoiled' comes to mine.
He loves car rides so much that he literally meets me in the drive when I get home, gets in, and then we pull into the garage. He bolts from the car to see 710 - whom he saw only 47 seconds earlier - as if Shep has been on a big long trip.
And we do. Every weekend, it's a trip - somewhere........for him. While I've known that I've needed to lose weight, I'd hate to see how much more would have needed ot come off had we not hiked both weekend days for the last seven years - rain or shine, snow, wind.....you name it.
I love that he and 710 are so connected. They really are made for each other. That either of them let me play in their reindeer games is enough for me. Actually, we have similar, but different, relationships with Shep. He plays us both like fiddles.
While we love the "new" house, we really love it for him. We have a fraction of land that we did at the other place, but it's fenced in and the grass is much nicer  He loves spending time out there doing nothing - though will chase the squirrel that runs along the fence, or will join in neighborhood canine conversations over that fence. We are thrilled we can give it to him.
He is his dad's boy. He's not thrilled with other adult males who aren't my brother-in-law.  I'd say we'd work on it, but we still aren't really socializing with people at home.
Anyway, it doesn't seem like seven years - well, almost six since we got him.
Happy Birthday to him. I'd say he'll get a special treat, but that is kind of every day.
Song by: Prince & the New Power Generation
Posted by Blobby at 12:07 AM

Many, MANY happy returns to the handsome birthday boy. May he have a lot more such to come.

Happy Birthday, it seems like just yesterday that he joined you

Love it when a dog finds his perfect people.

Happy birthday Shep hope you enjoy the day and save a few treats for Sophie.

Holy cow. I've been reading your blog for seven years?

Shep and his sister are not hogging 1/7 of your blog. They are graciously allowing you to post other content the other six days.

Many happy returns to the pooch! I am glad you all have each other.