I think (?) you all know we had our backyard completely redone last year. I'm not one much for landscaping or vision of, so 710 was in charge.

The yard, 8 months before we purchased, was a partial victim to a microburst in 2019. A tree was uprooted, taking a bit of the yard with it, and went crashing down demolishing a fence and a future neighbor's car.

As the then owners were divorcing and ridding themselves of the memory of each other and / in the house, fixing that mess (well they did the fence and I'm guessing got the neighbors a new car, courtesy of insurance) wasn't at the top of their list.

The backyard, this year, is quite oasis-y. It took a full year for the grass to be what it is, and the plants to come into their own - even with the severely harsh winter we had. We spend a lot of time outside and Shep love rolling in the grass and being out back.

The front yard however, was still in need of some love. Our landscaper, not out of the goodness of his heart - I don't think, offered a free design of what he though it should be. 710 tweaked things here and there, and I think I got a say in some plant or two, but over the course of three days, they ripped out a bunch of overgrown crap and carved out, planted and mulched our front beds and trees. 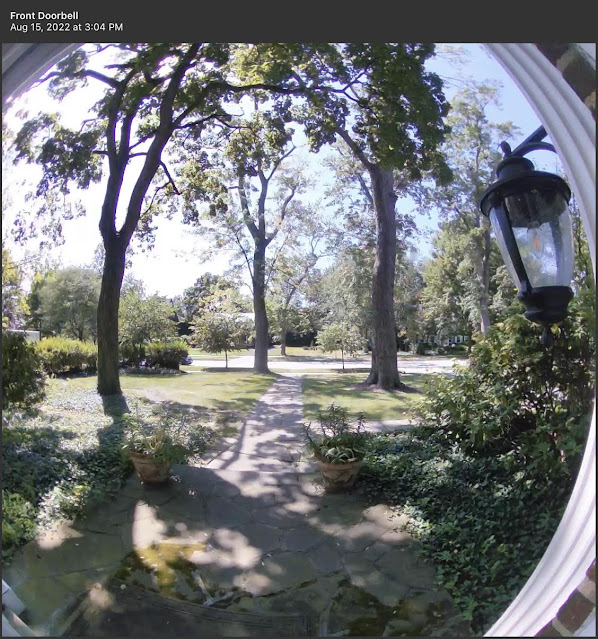 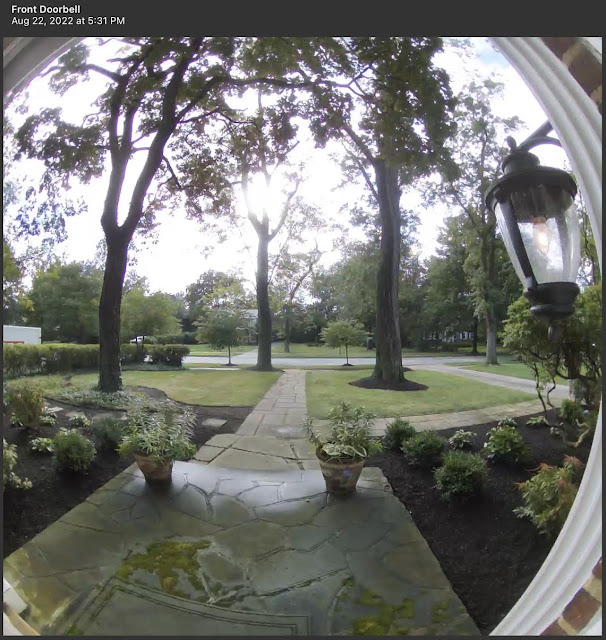 There you have before and after pics..............from the doorbell camera.
Yeah yeah, we have to power wash moss off the front step, but it's looking better, though things needs to mature a little.   .....myself included.
Ripping things out near the house has opened up the house......a lot.  So much so that the lower shutters which have been in the basement before we moved in now much be hung. It looks silly now. Before, bushes covered that flaw. Naturally, the lower shutters (unhung) and the upper ones are completely different colours.
Bother.
And we're sure all have been painted over hundreds of times over 102 years. Do I care if they're stripped and all repainted?  Will someone walking by at 75 yards away notice?  I don't.  They won't.  But I do believe it will tug at 710.  But it will give us the kick to paint the front door, which isn't red and it isn't orange. It needs to be one or the other...............but not orange.
So, once that is done, perhaps you'll get front facing before and after shots
I'm not promising you anything, Whoopi.

Song by: Florence + the Machine

I think anyone with a good eye will notice how crisp , the new design is. Excellent .