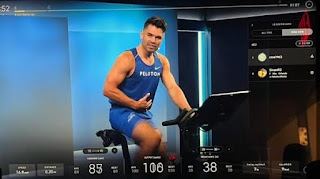 While in quest to be thinner and more desirable to no one, I went back to "spinning".

I have a bike, though it needs some decent amount of tune-up before it would even be street legal. But having Shep makes it harder for 710 and I to go out biking. Maybe next year we will try.

In the meantime, I got on a stationary bike on Sunday and rode 10 miles.

The gym has Lifecycles. In any gym I've been to, I have never been a fan. For the last few weeks I've been trying their recumbent bikes, but you know, it's just blah. Maybe I'm getting a workout, but I don't feel it.

But my current gym has six Peloton bikes in a separate room. I've never been on one and honestly, I had no desire to pay for a Peleoon membership on top of my gym one. In the 4.5 months I've been there I have seen two people use them.

My sister said, "maybe it's part of your membership already".  Maybe. As it turns out it was / is - and she's the one who had to tell me because she did the research.

Honestly, it took me as long to set up the account and pair my audio as it took to do my first ride. I kept trying to pair my phone and not my headphones, so it kept failing.  DUH.

Then there was the workout / instructor selection.  I limited it to a 30 minute ride - as it had been a while - and tried to find a decent play list.  Out of frustration, I just selected one.

The workout was in German.

My friends Jon and Meredity laughed and laughed at this.  Rightfully so.

You'd think I would have stopped it and found something more up my alley than the warm tones of the Germanic people.  You'd think wrong.

It turns if you're somewhat intelligent and speak little to no German, you can still figure it all out. I could see that during the ride my resistance should be at X and my speed should be at Y. At worst, come the end of the workout, I can count from 5 to 1 in another language.

The ride was doable and sweaty. 30 minutes was a good intro and I think I can progress fro there on m non-running days. It's good to mix it up, I think.

During my ride, it was difficult not to think back to spin classes and how much better some of the instructors - especially my fave, Andy.  I had such a man-crush on him, I'd have made-out* with him in a heartbeat. But he really was the hardest and best instructor at my former gym.

I kid you not, when I walk out of the Peloton room and there doing fucking chin-ups is Andy.

I'd say ' what are the odds ' but number of gyms divided by number of men in the 216 with the open earlier than x amount of gyms by y number of hours probably takes it to a high probability.

I'd say we 'caught up', but I'm 99.97% sure he has not idea what my name is. He is nice and pleasant to look at, and talk to, but whatever lust I had for him no longer existed.

Randy Andy is no more! That is growth!

I have never been a fan of coached workouts, I scream at myself enough

So the Pelotons are worth it?

Is it growth or giving up?