Yeah, I came out of the gym and thought, "oh, I'm gonna need my umbrella later.....", but that never seemed to be the case.  Though 710 - who drives south to work - said it poured on the way down the freeway.

But being grey and overcats isn't really bad weather.  And I got now alerts from either of my two weather apps. 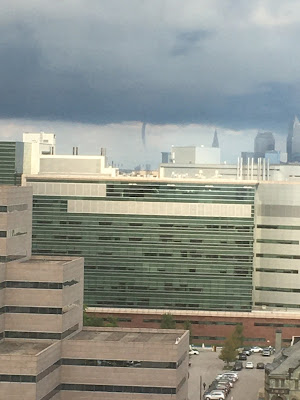 I don't think it tornadic (I love that word) activity or not, but it looked weird.

Lake Erie would have been to the far far right of this, so I don't think it would be a water spout. And as far as I can tell, I can't find anything online that says anything like that happened since 2019.  Yet, somehow 710 found a local story - from Fox! - that said there were a couple of them over the lake.

It was kind of a cool image though - and I got to use the Airplane .gif when she sent it to me, so all is right with the world.

That is what they look like, most never touch the ground. Years of living in Flora-Duh I have seen those before.

So adorable! So long as nobody gets hurt.