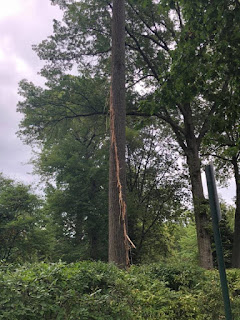 As I mentioned last week while holed up in a Residence Inn with dog and husband, the storm we had was bad, and possibly a microburst.

It totally amazed me that it took Cleveland media - print, radio and TV - three days to even report on it, save "30,000 people without power".

I love a good thunderstorm, but before we lost our power, we actually gathered the pets and migrated to another area of the house. Quickly - especially when we assumed a bolt of lightening hit between our place and the neighbors.

As it turned out, we were right about the lightening and the neighbors, just the wrong one.  In the title image you can see how lightening travelled down this tree to the ground. Enough to damage, not enough to actually split the tree.

We had been worried about our 100ft oak right next to the house. Well, we were more worried about the house and the oak falling on it. And us.  As it turns out it didn't.

But that said, others close to us were not as lucky. 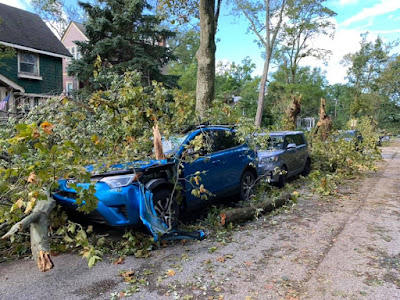 This was a few streets over. There is an entire Farmer's Insurance ad with this. It wasn't the only car on that street. 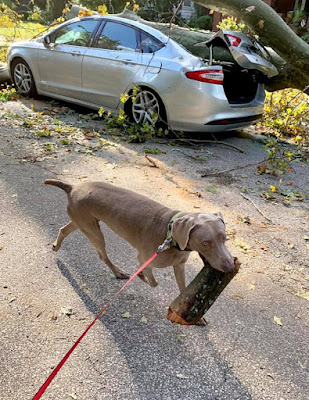 Senna, an ex-neighbor dog (and still current daycare dog) helped with clean up.

But there were trees everywhere. Down, that is.  Below is a very small sampling of some of the damage. There were streets that weren't even passable on foot, let alone vehicles. 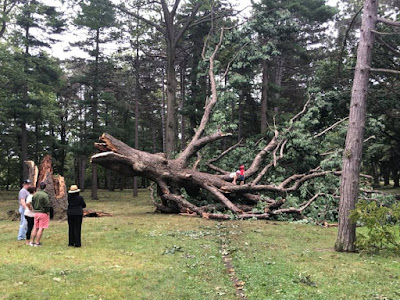 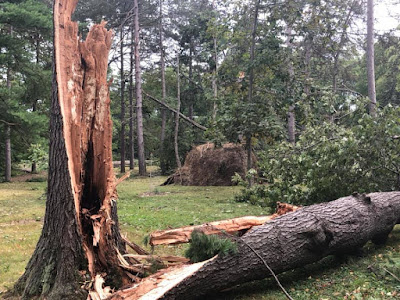 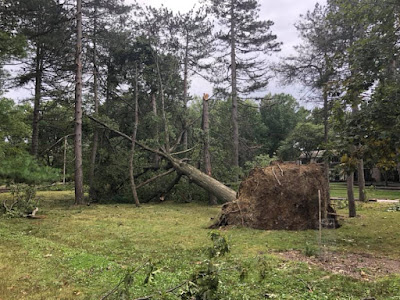 We had power trucks in from New York, Indiana, Pennsylvania and Maryland. ...and those were just the ones I saw.

It took us 48 hours to get power. It took some another 48. I wouldn't have made a great pioneer.

We totally lucked out.

Song by: Lou Christie
Posted by Blobby at 12:07 AM

shit; you are damn lucky, all of you.

PS - my baseball team is visiting your town for the weekend. your baseball team will probably kick the shit outta us. we deserve it.