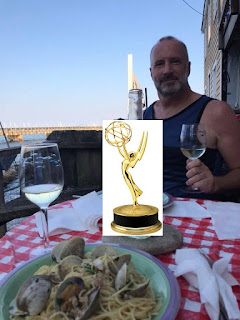 "Oh yes, we are playing", said Mike in a text back in mid-July - but without the comma.

I had given us both an out on this year's Emmy shindig, but my winning the Oscar thing this year must still sting.  As it should.

This one isn't going to go to well for me. Maybe for us. I haven't seen a lot of these. I haven't heard of many of them either.

I thought about just saying, "they're all winners in my book!", that way, I cover my bases and no matter who wins, I win.

But Mike would call 'foul' or maybe 'fowl'. Stupid homonyms.  So it's basically pin the tail on the TV show.  If I lose, I won't feel too bad.  If I win, I'll gloat like no one's business.

While the list below seems extensive, it was more so, until I found out we didn't need to worry about the Creative Arts Emmys, which were last week.  .....and just to nitpick, isn't acting, writing and directing creative and arty?

This works to my advantage, as I know Mike would have voted all things RuPaul and Queer Eye.  There is a fine line between being gay and being gay!  But he found that line and pranced right over it.

Full disclosure:  I started this fully sober.  I'm not ending it that way.  Mike is aware of this. I'm not absolving myself of my decisions due to alcohol, unless I lose, then all bets are off.

Don't bet against a show about race and Rape.  SVU hasn't been on for two decades for nothin'.

I've never seen 35 seconds of this show. But fandom will win out.

How how I love Linney. How I hate she won't win.

Ummm.  Sure. Because he was great in the Boss?

I'm thinking Harry Potter's horrible aunt will win only because the 43 GoT actresses will cancel each other out.

Oh, how the f*#k should I know? I'm just hoping Mike doesn't either.

You'd think GoT, but it's the final episode and everyone seemed to be so-so on the ending. It might knock it out of contention.  I have absolutely nothing to back up my selection.

It'll be Hader. I still haven't seen Barry, but it has good buzz.

Save for Waller-Bridge, whom I don't know, I love all these ladies. But c'mon. JLD. She is fucking awesome.

Heyyyy.  It should be Shalhoub, but it won't be.

I SO want it to be Chlumsky (I say that every year she's nominated for "Amy" on Veep.  But it won't be. Again. So let Coleman get an Oscar and an Emmy in the same year.

Jews + Comedy = Catskills.   This seems reasonable enough for a win.

Ali has two Oscars.  He don't need this.

While Nash could get it, she has all the Claws money.  Like Lola Heatherton, Williams is a triple threat. she acts, dance and acts.

It's Patricia Frickin' Clarskson.  She should win EVERYTHING!

Outstanding Directing for a Limited Series, Movie, or Dramatic Special A Very English Scandal Chernobyl Escape At Dannemora Fosse/Verdon “Glory” Fosse/Verdon “Who’s Got The Pain” When They See Us

I want to say Fosse/Verdon, but I don't think that will get me the win.

It's about dance. Fosse dance. These TV folk think they're artsy, so they'll vote what they think is.

You don't fuck with Willie S.

I'm going with what will inevitably be Mike's choice. If nothing else we'll tie this one.

Not a fan of Sahsa Baron Cohen, but.........he kind of got stupid american assholes in his crosshairs. Yeah, I'm talkin' to you Palin.

It's about writing. And while I love Colbert, Oliver's written material is strong.

Song by: Leonard Cohen
Posted by Blobby at 12:07 AM

Well good morning, sports fans. It’s that time of year again, when the Emmy bug bites Blobby square in his (square) butt. Now normally, I don’t watch anything that’s not broadcast on C-SPAN. And looking down the list of nominees for this year’s awards gala, there so many names of shows and actors that I don’t even recognize. So I’m afraid my guesses will be somewhat of a crapshoot, instead of my usual carefully curated, double-researched, and notarized selections. But here goes nothing. May the best, most-handsome man win…

Outstanding Comedy Series
It’s VEEP for the win. But I do love the two episodes of Schitt’s Creek I watched two years ago.

Outstanding Drama Actor
Stepping away from THRONES, I will go with snappy dresser Billy Porter.

Outstanding Supporting Actor in a Drama Series
“The Dink”

Outstanding Supporting Actress in a Drama Series
Too many actresses in Thrones, so they will split the vote. How about we all vote for Julia Garner?

Outstanding Comedy Actor
Love me some Bill Hader. Was sorry to see him leave Saturday Night Live. AND he won this award last year!

Outstanding Supporting Actress in a Comedy Series
Olivia Colman. For those of us counting, this is the lady who won the Best Actress Oscar last time around. Good things come in twos. (??)

Outstanding Directing for a Comedy Series
The Marvelous Mrs. Maisel “We’re Going To The Catskills!” My god, I have no idea. But I know Blobby liked this series, so I will throw one his way.

Outstanding Lead Actor in a Limited Series
Jharrel Jerome. Never heard of him or this series. But I like the way he spells his Jname.

Outstanding Competition Program
RuPaul’s Drag Race. Can I admit I've only seen clips of this show? What season did Blobby win?

Blobby - you didn’t add ur usual disclaimer about how the law offices of Dewey Cheatum & Howe will be monitoring this evening’s votes. That’s my favorite joke you tell.

Trust me - it is in the draft for the follow-up