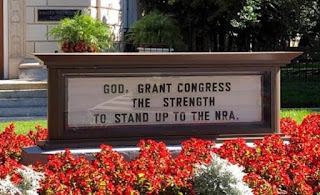 This sign, to your right, allegedly sits at a church across the street from Congress.  I cannot attest this to be true.  I looked at a detailed map of all sides of the capitol but didn't really see a church.

"Across the street" could mean just about anything or anywhere in internet terms.

Still, real or not, the message remains a truism.

I am fully committed to there needing to be something to be done regarding gun control.

I am also fully aware that if Sandy Hook and Parkland didn't spur a single fucking thing, that with the Senate Majority leader still in place, nothing - and I mean NOTH-ING - will be done. Moscow Mitch said as much yesterday.  He'd only put 'something' forward if BLOTUS agreed to sign it.

If you don't have a detailed, oh say, bill, how would you know that Congress would pass it to even BE signed?  So, it sounds like Moscow Mitch and BLOTUS would concoct and go back to Congress as opposed to way 243 years of procedure is supposed to work.

I'd say it's 'baffling' except that anymore it is not - and it is borderline dictatorship. The "president" telling the legislative branch what they're thinking / doing.

You want to know what else is baffling?    This! 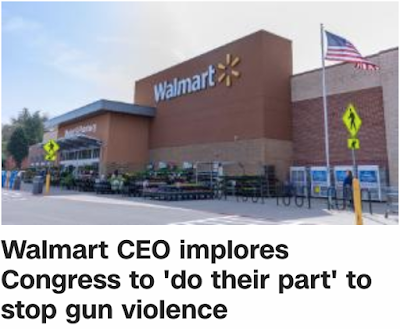 Srsly.  While I applaud them, WTF?

I'm guessing only because they've had two shootings at their stores this year alone.  When Walmart is seemingly (I'm not sold on anything they say) on the right side of history, it makes me start to question everything I've done..........ever!

Don't worry folks. The internets brought me back to reality with this one. 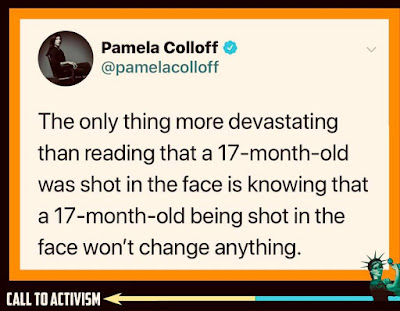 Song by: the Rolling Stones
Posted by Blobby at 12:07 AM

A background check bill, that would include private sales, passed the House, and Moscow Mitch is refusing to bring it to the floor of the Senate unless "He-Who-Must-Not-Be-Named" agrees to sign it, if it is passed. I agree, Congress is refusing to do their job,

wallfart would NOT have acted if their stores were not being used for a killing ground. and nothing will change til we flip the senate and the white house.