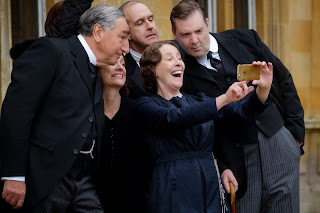 When cultures collide.  The title picture made me laugh.

We went to see the Downton Abbey movie - not because we felt the overwhelming need to see it the first weekend, but more of didn't want to be told about it before seeing the movie.

As it turns out - you could have just told me.

Premise - the King and Queen of England come to the Crawley airbnb for two nights. Along with staff, which makes downstairs seem redundant and not needed.  Oh, how will it play out???

Other than that, it's fairly standard fare for the Grantham house.  Some extremely predictable storylines, if I say so myself.  I won't spoil it for anyone, but it's not horribly clever, but then again it's not quite the Young & the Restless, which it started becoming in serial form.

The horribly contrived story to bring Mr. Carson back, was well.....horribly contrived, and executed. Love him or hate him, I've always been a fan or Mr. Barrows, and his being pushed aside for Carson was stupidly put together.  Still, whatever neurologist was seeing Mr. Carson for his inferred Parkinson's should be commended, as he has not sign of it at all anymore - even moving old, expensive bottles of wine without the slightest tremor!

Yes, I get this is an event movie - for the ladies and the gay men - and everyone expects to see Carson, but c'mon.......it wasn't a small plot point in the show and now it's just erased?  Julian Fellows could have been a little more clever, no?  Well......no. apparently he couldn't have.

A highlight was when Delores Umbridge and Minerva McGonagall exchange words. And you know, in real life, Delores is married to Carson, so I think we know how she got this job!

I always enjoy Tom Branson - as he is a looker. His storyline(s) were seen a mile away too. One of them done well, one......ehhhhh......questionable at best.

It was really the downstairs staff one that just annoyed me. This has a storyline that could have only been executed by the downstairs crew........or any Laverne & Shirley episode. Though with Anna's scheming here, it isn't a far stretch to assume she easily could have pulled of Mr. Green's murder and gotten away with it.

Edith was Edith and Mary was Mary. It's not quite as fun as when they didn't get along. There is a great moment with Granny and Mary though.  Maggie Smith had a few good lines, only one that made me laugh out loud.

I did like Barrow's storyline too, but again, predictable.

What every gay man and woman needs to know - and honestly, who else is going to this movie - is there is a boiler repairman that really needs to be seen. Totally worth the price of admission. You'd have a picture here if I could have located one while the actor was in character. He loses something in 21st century clothing.

Afterward, 710 thanked me for 'gay date night'.  My response was, "our date nights are all gay ones". But he was right in his reply: "well, this one is more gay than others".   True that.

Downton Abbey was fine. It was a super-sized version of the tv version, but nothing more than that.

Yes, the consensus this side was that it wasn't too bad at all though basically like an inflated TV episode. That's where my advantage showed in never having seen any of it on telly, thus impressing me rather more than its regular fans. Pleased you don't go so far as it describe it as a time-waster, though.