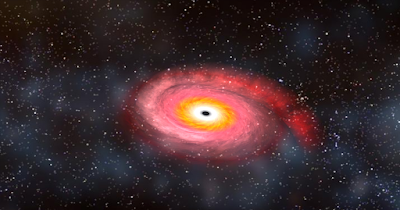 There have been a few great astronomy stories this last week.

One on the Voyager team, which has been working together for almost 40 years.

One regarding storms on Jupiter, which were frickin' awesome to read.

But if there is a single story, I guess it would have to be the Black Hole that swallowed a neutron star.

It's news, but it is not new.  Yet it is. Space and time are funny things when one speaks in terms of immediacy.  This act happened 900 MILLION years ago.

And it happened 8,500 million trillion kilometers away from earth.  I mean, is that even a number?  And if so, how do you say it?  85 thousand million trillion.....??  They even skipped 'billion'.

The astronomers say the black hole ate the star almost instantly. I don't know why, but that seems unreal to me.  Neutrons can roughly be the size of Chicago and denser than the sun. The same astronomers in the U.S. and Italy are seeing ripples from this event...........from 8,500 million trillion kilometer away..........from almost a billion years ago!

To me, this is just amazing. I don't have the brain capacity to say 8,500 million trillion kilometers, let alone conceptualize it. I suppose that's the reason I'm not an astronomer. But that's the only reason.

Yes, the human brain proves a woefully inadequate instrument to comprehend or event to ingest such numbers. I think we'll have to evolve rather further before we're able to take it in - though I fear that the prospect of continued evolution, at least for us on this planet, looks ever bleaker.

In the universe of truly large numbers that number is comparatively small.

The largest number that has ever been considered is 2.04 X 10 to the 390th power (so basically 10 with 390 zeros behind it times 2.04). This number was the result of statisticians and geneologists calculating the odds of a strand of RNA forming on it's own.

Fun fact (and for reference to how large that number is) - 10 to the 90th power is the number of observable atoms in the universe, which is called a "Google".

Excuse me, the number is called a "Googol". But ya - that is where the search company ripped the name from.

The Universe is mind-boggling isn't it? Such numbers and sizes so out of our scope of comprehension.