Here I Dreamt I Was an Architect 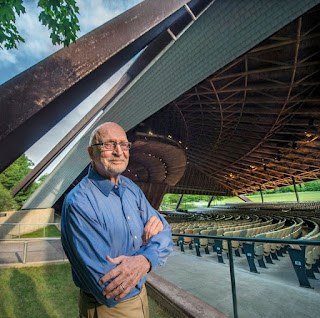 Unfortunately, 710 and I lost a neighbor and good friend over the weekend.

Also unfortunate, we knew it would be coming.

Piet was 90 - and yes, we were friends with a nonagenarian, and yes, I did have to look up that word and its spelling.

Living only a few doors down, we bonded early with Piet and his wife, Bobbi, shortly after moving in 14+ years ago.

Bobbi might be Shep's best friend. He LOVES her. He stops at the end of her driveway every walk (both ways) too look and see if she's there. She is the one who will provide him with a toy now and again.

Age being no barrier (not that 710 and I are teens or anything), we had a great and easy time having dinner or being at a party and just conversing with them.

We were able to be at a party where he received an honorary doctorate, something for which he was very proud.

Even better, we were able to go to dinner with the couple about a month after my mother's death and have a great meal and time together. Piet, being an architect, was a great companion for 710 who for . a time was a student of architecture. He's still enthralled with it, so they'd have great conversations.

Piet's and my life intersect at any number of places. Starting possibly with my mother. Piet, being of Dutch decent, had a Dutch last name. My mother dated someone of the same name. I'm not saying it was Piet, but there was only a three month difference in age. And his name isn't horribly common. I never got confirmation from either of them on this. And clearly will not now.

You see Piet above, standing at Blossom Music Center - a premier shell built for the Cleveland Orchestra's summer series. They also have concerts by popular artists there. I have a love-hate relationship with Blossom.

But my uncle was an ardent supporter of the Orchestra and helped get Blossom built. Piet was the architect, so he knew my uncle and aunt - and at least one of their sons - very well.

I also have worked in not one, but two, buildings Piet has designed and built - one of them being where I slipped on "his" marble floors and fractured my hand.  I playfully have blamed him for that.

Our last visit was fun and we had a good time. Piet was asking if we still watch the news. I admitted I rarely do anymore. He said he and Bobbi still did - but called it Booze News.  Depending on how bad it was determined how much they drank.

Song by: the Decemberists
Posted by Blobby at 12:07 AM