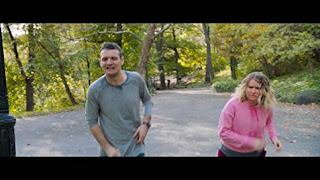 As it has seemingly been advertised at theaters and in my Facebook feed, Brittany Runs a Marathon, seemed light enough and ok enough to give it a go.

The movie isn't a big-thinker one, for sure, but it is kind of cute enough.  It also seemed predictable enough - from what the trailer showed.

While the ending credits run, from 3-4 still shots, you figure this based on a true story - or elements of one.

Rotten Tomatoes gives it a high ranking 90%. Metacritic is a 74%, which is probably a truer number. Maybe higher to get to a C+ or B-.

While it is an Amazon Studio film, and not to disparage the studio itself, as they've put out many decent things, Brittany kind of seemed like a streaming movie than a theater one.

I have not yet read about 'the making of', but I have to assume for the most part, the movie had to be filmed in sequence. This seems to be made on a fairly low budget, so there isn't CGI or prosthetics, so the Brittany actress had to lose weight along the character.