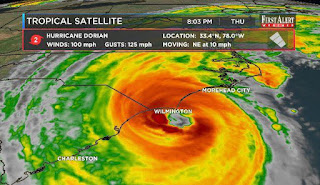 Dorian is not hitting Alabama - obvi - but unfortunately, it's not taking a toll on Mar-A-Lago.

Honestly, I was hoping it would decimate the property.

Where it hitting:  North Carolina.  One of the places it's hitting, exactly: Wilmington.

This doesn't bode well for 710 and myself. This is twice in as many years of a major hurricane making landfall in Wilmington.

This is where we spent our last two summer vacations. It doesn't seem that Florence damaged (at least seriously) the place we rent. But how many times can you get lucky?

We haven't discussed a third time in a row, but depending on what happens in the next 24 hours, that decision might be taken out of our hands.

After the Florence, Wrightsville Beach (where we stay, actually), had to bring in $16 million in sand to rebuild the beach.  I can't say what we spent there helped that much to offset those costs.

Let's hope the folks there, and in the other regions fare well.

Song by: the Smashing Pumpkins
Posted by Blobby at 12:07 AM

and still the dump rages on about AL.