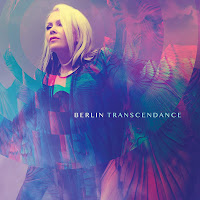 Berlin has a new disk out, Transcendance. The original members of the group that is. This iteration has not been around since 1986-87.  This version of the band only had three disks, though there are more under the band's moniker.

I loved (x3) their first disk with vocalist Terri Nunn,  Did you know Toni Childs was their original vocalist?  I didn't.  And even she didn't appear on their first album, another vocalist did. Thanks wiki! Still, Pleasure Victim was just (and still is) great. The following disks were fine, but I never thought they hit all their potential.

Once "they" did "Take My Breath Away" (a la Giorgio Moroder) it was over. The band wrote and played not one note on that song, though it was credited to them.  You can hear the almost identical version that Martha Davis, of the Motels, sang on a version that wasn't used. The instrumentation is exactly the same.

Transcendance is ok, but it is not going to match their heyday, but almost 40 years later, I suppose that's not the expectations.  It starts off well with "I Want You", but the following song, "Show Me Tonight" is just horrible. Forget the overproduced electronica (actually, don't forget it!), the talking over it made me think of so many 80's bands who had that going on. But Berlin, you're an 80's band in the 21st century.....go and grow with it.

The title track isn't their usual fare, but it is not bad in the slightest.  But the rest of the stuff is fairly mundane. Well executed, but the creation is meh.

While the music and lyrics might not be top notch, Nunn's voice is pretty good and has remain intact, considering she's 59.  Wait.   How is THAT possible?  Not that she's that old, but she's only THAT old. I'm not buying it. For a second.
Posted by Blobby at 12:07 AM

Berlin! Really? My first boyfriend loved them so. I haven't thought of Berlin in decades - or the boyfriend.