What Are Their Names 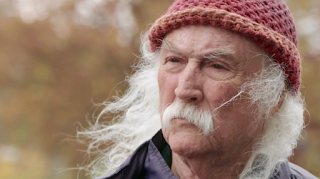 It was a two movie weekend.

When we saw the Abby Road movie almost a month ago, they ran the preview for David Crosby: Remember My Name.

I'm no Crosby fan per se, but I'm not a fool either. I know some of the groups he's been involved with help shape the California music sounds - as well as the 60's and 70's music scene.  He is in the Rock and Roll Hall of Fame - twice.

But I also know, just by articles over the last few decades, he's a fucking mess, to the point (his own, actually), that all the people he used to work with won't even talk to him now.

The clips they use of some of these artists are archived, mostly from 2000. Maybe it's telling (or not), but Stephen Stills isn't one of those.

I'm not truly comparing Crosby to BLOTUS, but he does claim a lot of firsts, a lot of records in numbers, that aren't ever really substantiated, though I'm not sure this film was looking to do that either.

But, at 76 (when this was filmed), he still tours as that's how he makes his money, but unlike others his age, has a pretty stellar voice (yes, I'm looking at you, members of Fleetwood Mac). While he does sing in this movie, in the Byrds and CSN(Y), if he wasn't singing lead, I'd have a hard time distinguishing which voice might be his. He harmonizes well with his co-artists, but as he will even say, the hits he played on were not his.

Crosby is an interesting subject matter - and he was interviewed by Cameron Crowe, who first interviewed him back in 1974. Some are good questions, and some good answers. It was a fun 90 minutes and the entire film was enjoyable.

This makes the third music documentary-like film we've seen this year. There will be a fourth. A movie on Linda Ronstadt was released the same weekend as this Crosby movie..........just not in Cleveland.  Not yet.


BTW, we're totally making the 2019 movie goal - most likely next weekend. I'll have to carefully evaluate what 2020 will look like in terms of a new movie goal.