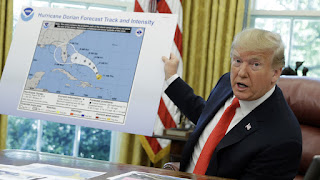 No lie, no foible, no misstep is small enough to double down on.

It takes a small man with a fragile fragile ego to have to cover his tracks regarding a lame-ass tweet.

I know - you're thinking: which one?

I get it. There are many. But BLOTUS did send out a message regarding a hurricane hitting Alabama.

Oddly enough, NOAA didn't.  But why let science get in the way of 280 characters?  I'm sure his meteorology degree from BLOTUS University is perfectly cromulent.

Honestly though, the lengths one goes to try to take a silly mistake instead of just saying 'oops'....or nothing at all.  This hoop-jumping only prolongs and accentuates the initial stupidity.

Yet, I suppose, someone who has such a severe case of Borderline Personality Disorder doesn't recognize such things.

the dump is ALWAYS right (in his own little bubble). stoopid ass white male!

Cromulent? I had to google it. Never heard the word before. After looking it up, I realize why. I have never, ever, seen a single episode of The Simpsons. So now I have a new Scrabble word, thanks!
Being geographically challenged myself, I have no idea where Alabama is. Then again, I'm not the one running the country. Maroon, indeed!