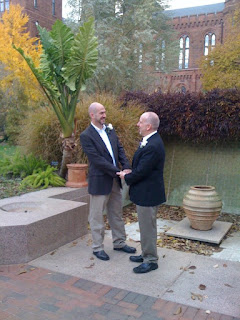 But a decade ago today, 710 and I married in Washington DC.

Oh, back then, the marriage was only legal in five states and the District. I won't say it was only ceremonial but it didn't mean much other than to ourselves once we were firmly back in Ohio.

Unlike other states who came around to same-sex marriage, Ohio had to be be taken there kicking and screaming and by a SCOTUS decision.

Months before the wedding - before 710 even knew of a wedding - I borrowed his passport and got our marriage license when I was on a business trip to DC.  Of course, we had discussed marriage, but had, at that time, made no arrangements. I took care of that.

It was a great day, except for the pictures.

Some years have been better than others, but that's true of all of us. We've seen more good than bad. Honestly, Covid could probably push any couple over the brink - and we've kind of been good this whole time. We have gotten along with each other's family - and what few times ours have gotten together has always been pleasant.

So, 10 is tin.  ....and I got nothing. And I can guarantee you he's got nothing. We have never done anniversary gifts, nor do I expect to start now.  Since there The Covid going on, there will be no eating out either. I suspect I will make salmon. There might be a cake - which is better than any present anyways. It'll just be him, myself and the always ever present Shep and Sophie (we are a pack!).

That's the best celebration a guy could ever have.

.....and just for shits and giggles........when we were in DC in September, we walked to where we got married. I did a short video when I thought I'd do a vacation video.

Congratulations on Your Anniversary! There is a lot to be said about being where you know you should be! Somewhere to go , someone to love something to do! I couldn’t be happier for you!

Congratulations, hope you have many more to celebrate.

I remember when you got married. can I have been reading your blog for 10 years now? happy anniversary to you and 710, with many more to follow!

Happy for you both. Congrats. Marriage is quite the undertaking. Meat and potatoes, gristle and bone. Not the fairytale ending we are led to believe. Happy ever after. Ha! I'm sure someone's done a college thesis on the fairy tale myth of modern marriage. Where did it come from. Enjoy your cake. Love is solid and comforting. Enjoy.

Oodles and oodles of congrats to you and your 'other' half, B. Both of you are a shining example to us singlies, something which Shep knows very well at first hand/paw.
Btw - Your little video arrives here as 'unavailable', which is rather strange as just about all your previous ones have played. But there you are - or, rather, there you aren't.
Have a happy day.

Congratulations, and many more to come.

yeah RB (and others), the video seems to not work. I'll try to fix. ....and thanks all for your kind words.

And I don't what anybody says, its a powerful, powerful moment when you say your vows.

I too want to join the conga line of congratulations ! Good for you two !