Boy in the Bubble 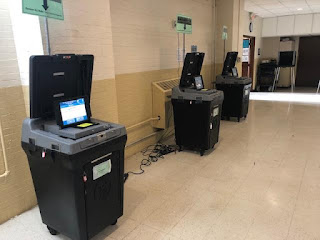 So, I got my assignment - FINALLY - less than 11 hours before I was to report for duty.
My music post on Monday might have had you believing I had worked the night before the election to set up. I should have edited all of that. I crafted that post a week ago. Ditto with yesterday's.
But at 05:30 I arrived and Lady of the Lake church basement to help final set up.  Or a lot more, since they didn't do what they were supposed to the night before.  People were lined down the block before 06:00 - polls opening a half hour later - and the manager was calling because the memory sticks weren't there. So we started a few minutes late.
After moving the heavy stuff - as I was the ONLY male there - I kind of decided to help at the scanners, since no one had given me a job. There was one other woman there.........who almost promptly left to sit down somewhere, leaving me to run / direct all three machines.
At first I was annoyed - and then I figured she would have gotten in my way, as I early on found a system to keep things moving.
I would say things were busy up until 1l:00. Then it just kind of petered out. I was surprised. I thought lunch hour would bring a lot.  Nope.  I thought after work would have them out the doors.  Nope.
We had 2,596 registered voters at this polling station in the system. Only about 1,000-1,100 came through. All but 200 came my way - those other were provisional ballots. So, if you did the math, we had around 40% show rate. I don't know what that means - in terms of good or bad.  It seems bad - especially THIS year.
I'd say the populations were semi-equally split. Maybe a few percentage points higher for people of colour. I tried not to look at ballots but when people had trouble - and they did have trouble - sometimes you had to.
Hey - 30 something guy with the dyed absorb-all-light black hair in the Ramones t-shirt: why the fuck are you voting for BLOTUS?  Take that fucking shirt off right now.  NOW!
I kind of / might of got that one person accidentally voted for both Pappy Joe and BLOTUS on the same ballot, but 19?  WTF people?   I finally told one of them, 'when they told you to vote twice they meant two different ballots'.
The Russian and Ukranian women were voting for BLOTUS. Most of the white men too - I assume. The guy in the Ruger gear (guns), I'm sure was. One of the other poll workers said the local gun store is sold out of bullets, so............yay! We're doomed if BLOTUS wins or loses.
Over the course of the day I was called Chief, Pal, Sport and the Guy in the White Shirt.
We only ad one non-masker, which wasn't bad for 1,100-ish people. Ironically (?) she had some semi-bogus Freedom of Speech organization lanyard and t-shirt. This all surprised me, as I assumed it would be contentious with some folks about masks.
I have to say, the best part of the day was a young mother telling her 2-3 year old son to stop playing his video game and take in what she was doing. She was showing him the importance of her vote. I made sure he got an "I Voted" sticker too.
It was a fuck of a long day. I barely left the building - barely left my 18 linear feet of space and still clocked more than 16,000 steps. That's kind of fucked up, but I paced.......a lot.
I opted not to turn on or read the news after my shift. Or anything like it. It will give me angst and I won't sleep. So I but this post to bed not knowing a thing about 'how it's going'.
Maybe I can make that last a few more hours.
Song by: Patti Smith
Posted by Blobby at 12:07 AM

Thanks for your service! Be well !

Kudos to you for working at the polling place. A reader in Philadelphia

19 idiots voting for both? WTF?

WTF is OH going for the orange fuckhead?

thank you for working the polls yesterday. my vet was doing the same thing. so was mistress maddie.

our PA sec. of state said yesterday "it ain't over til we count EVERY vote!" FUCK YEAH!

Thank you for doing that. J's mother worked every election in Cuyahoga County for over 50 years. She scheduled her life around the elections.

Thank you for sharing your experience. Sounds fun... well, interesting, anyway. People are strange. I turned on the television at 8:10. Screamed expletives at it. Turned of the television at 8:11. Not going to look anymore. I am opting out of this sh%tshow. Thanks for volunteering. Good man. Chief. Pal. Buddy. Sport. Guy in the white shirt.

Though this now seems very trite, Thank you! It was my first thought on reading this great post. The year of Angst only continues. Hello to Sophie.