Four years ago (+ a few days), upon waking up and hearing the new of BLOTUS' win, 710 rolled over and said: "Ride out the Apocalypse with me?"
I'm not quite sure truer words had been spoken in our decades together. We didn't need any of Dionne Warwick's friends to be that prophetic.
Apocalypse. Indeed.
MSNBC called the win first.  Who knew?   CNN was close behind.  It took the above NYT to jump on the bandwagon, and even long for the Washington Post. 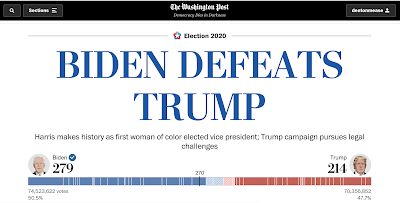 Of course, I had to go over to see if Fox had anything to say.  Of course, you know the answer. 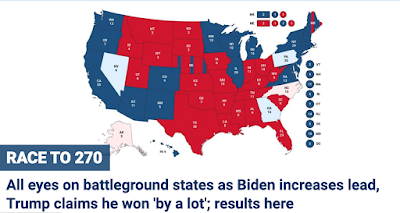 {insert eye roll emoji}
So yes, the last four years have been into the depths of hell. I am not even sure I can comprehend the crazy that is about to come our way, because I don't believe this is over.
Oh. I believe the election is over and unless the Electoral College thing is a huge fuck-up (and it is 2020, after - the year of the continual fuck-up), I don't worry too much about Pappy Joe not being 46.
And yes, yesterday I started looking at news. It seemed to be safer, as a win seemed a more 'when' than 'if'.
Also, I think the 4-5 days of not knowing helped me decompress a bit into whatever the news would be. I think that is why I was peaceful with the news, but not ecstatic. Of course I was happy, but I also know how much work is to be done once the transition has happened.
So, I think it's really more a sigh of relief than it was of happiness. It's like we can all take a collective breath finally.
I am also hoping (I know........I know) that this 4-5 decompression time is a thing for the nut-bag GOPers. Maybe it's like the 'cat is stuck on the roof' scenario, so when they get to the 'news', it won't be rootin' tootin' gun shootin' everywhere.
Wishful thinking?
My nephew, who lives in Chicago, went downtown to the gathering. He said the streets were impromtu dance floors.  They had raised the bridge over the river making it hard to get to the BLOTUS hotel. 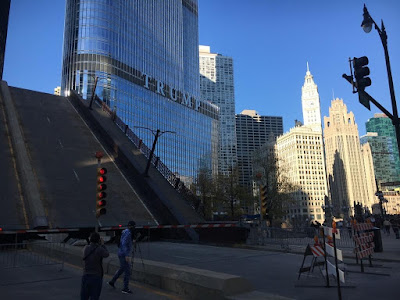 We looked for a celebration in Cleveburgh, but we came upon none. Sure, there were a few honking horns, but nothing like the parades in DC, Columbus or even P-Town.  I mean, Ohio is solidly in the red, but Cleveland is not. Where was the love?   (I semi take it back........we are just now getting fireworks!)

I do hope the Electoral number goes up past BLOTUS' 2016 count. As he wrongfully said he had the highest electoral count EVER!, it would be HI-larious if Pappy Joe got more.

I see more tantrums and pardons on the way over the next 73-ish days.  I think I'd spend a year's salary just to watch BLOTUS get dragged out of the White House.

Bet Pay Per View Event ever!

If this is as good as it gets, I think it’s time to try to work quickly to undo all the EO’s Trump signed. Governing easily shifts to two Senate seats in Georgia, the South and outside Money dont necessarily guarantee a win much less Two. It may not be “Morning in America” , but thank goodness it’s Daylight!

Its a good day for America and the rest of the world who had to listen to that piece of crap for four years.

I recognize that chicago street scene!

CNN.com pointed out that this is the first time in nearly 5 years that Trump is not dominating the political news.

One of your happiest entries in a long while. :-)

I slept better last night (nearly 9 hours!!!) than I have during the past four years.

A good day for your country x

So refreshing to hear on the news this morning that the Pres-Elect is assembling a team of scientists - yes, SCIENTISTS - to fight the Covid-Covid-Covid. That alone ought to have pushed Grumpy over the edge - were it not that he'd long ago jumped over it himself. Shame that Joe has to wait another two months plus to implement some chance of slowing down the absolutely horrendous death rate - but now at least there's genuine HOPE to lift our hearts.