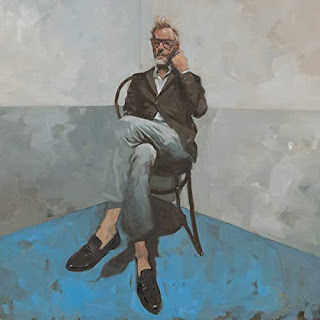 I've almost always questioned lead singers of bands who write, or help write, the songs and their need to go solo. Or have a solo disk.

I get, say, the members of someone like Fleetwood Mac who have three lead singers, and who only get 3-4 songs every few years (well, when they made records). But the Brandon Flowers' of the world?  Phil Collins?  I suppose it's more ego over art, but who knows. Neither of the latter two sound much, if any, different than their band work.

So, I had a raised eyebrow at Matt Berninger - lead singer and lyricist for the National - releasing an album on his own. Album is the key word, as he's of that ilk where vinyl is preferred. As a New Yorker cartoon nailed it with:  "I like vinyl for its expense and inconvenience".  I'm sure it has its qualities, but my aging ears probably couldn't tell the difference. And you can't take the music with you.

Admittedly, when you you are a baritone, your options to change things up are slightly more limiting. Berninger's voice is fairly distinctive and he does have a certain style, which he doesn't much try to abandon here.  Some of the music tries to deviate - but not as hard as one would want.

"Silver Springs" (not a Fleetwood Mac cover) is hitting the marks for me. I'd say the chorus more than verses, but it might be hard to say 'chorus' too. And it's more about the phrasing and vocal arrangement than it is the words. Gail Ann Dorsey's voice is cool and smooth and fits the song and a good contrast to Berninger's.  Dorsey might also sing the best lyric on the disk: "everyone knows where to hang / but they never show you the ropes".

"Loved So Little" is up there too. The strings kind of really help make that song - and the Hammond organ. Digging "My Eyes are T-Shirts" which is the shortest song on the disk, but it does seem to go on much longer.

The music for "Oh Dearie" is so not National-like, and it's very welcome.  "All For Nothing" is all too-National like. Right down to the horns.

Actually, I love when the band uses the somewhat muted trumpet and trombone, but keeping them with Berninger makes it harder at times to distinct solo work from the collective. This happens on a number of tunes.

The album is a solid B-.  I wanted more out of it, but I wasn't expecting more. To be truly different, I think Berninger would have really had to step out of his comfort zone - and it doesn't seem he was willing to do just that.  But at least I have "Silver Springs" to hit repeat on a dozen times per day.

Hot and cold on the National. Find them frequently unfocused and roaming all over the road - the latter isn't a bad thing... but you do need to know wher you're going. Spot on about baritone voices. But then it comes down to song choice and the occasional surprise. Lead singers going solo? I would agree that there are a number of unnecessary solo albums. Most are vanity projects. Because they are so integral to what makes the band click and their formative sound, the apple rarely falls far from the tree. Mick Jagger springs to mind. His solo work? Gawd awful. Still, it is a rite of passage for such groups. Will they survive their lead singer striking out on his own? Oh, the speculation. Zzzzz. And I disagree... this is not lame. I love hearing what people are listening to and too many never unleash their critical side. I enjoy reading reviews. It's an art form. Dig deep and have fun with it! Thanks for sharing.