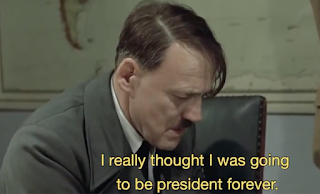 I'd say IF I were a conspiracy theorist - but I'm beginning to think I might be. It might no longer be an "if".

I never ever ever ever expected BLOTUS to concede the election. He's not the kind of person who can ever admit they failed, make a mistake or even apologize. To him, that's a weakness.

And if you dare scroll through the last four years of my post, for at least 3.5 of them, you'll find me talking about his trek to dictatorship.

It's possible he's about there.

A failed re-election bid. Barr inserting himself and the DoJ looking into voting irregularities (though none have been found). A fired Secretary of Defense. The deputy chief of staff to the undersecretary of defense for policy: gone.

“The president is taking back control of DOD. It’s a rebirth of foreign policy. This is Trump foreign policy,” said the official, who spoke anonymously and without authorization., said an anonymous DoD source.
Control. Of the DoD. Two months before he would have zero control.
Oh - and he installed a "temp" head (you know, so he doesn't have to get congressional approval) of a man who called Obama a "terrorist leader".   So.................this is going to go well.
While I have been predicting this for sometime, it's kind of fucked up to watch this potentially happening in real time.
Of course, we've seen this happen in many other countries over many different decades, but deep down, at least I thought, "well that can't happen here!",  but the reality should have had me say, "why couldn't it?"
I think we just might see some attempts.  Let's see how silent the GOP remains.
Song by: the Clash
Posted by Blobby at 12:07 AM

the GOPricks will keep silent cause (1) they agree with the dump and (2) they don't wanna piss off the dump.

I will Have at least as much faith as Anne Frank, but I will not see the same results. Treason and execution is a thing, Orange Psycho couldn’t Handle!

I don't get it. I was hoping for a return to civility... but apparently the orange ogre threw away that handbook and just keeps sacrificing things to Satan. Holding my breath. We all are. And have been for four years.