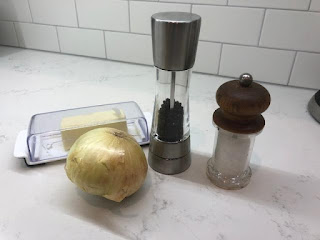 It's been a few since I posted a cooking anything. But the day after T-giving seems to be about the right time, no?

I'm not really a turkey guy - but I am ok with sides. Yes, we had dressing, green beans and mashed potaters. All the regulars for a very non-regular, stay-at-home Thanksgiving.

But I wanted to try something else. Onions.

Not in anything. Just stand alone.

I love onions done on the grill, but I thought I'd try them in the oven. The one recipe I saw looked frightfully easy. One should avoid these. For the first part of that recipe, they had the halved onions in muffin tins. Oh, it looked nice, until you realize you don't make muffins that large or have onions that small.  I improvised. 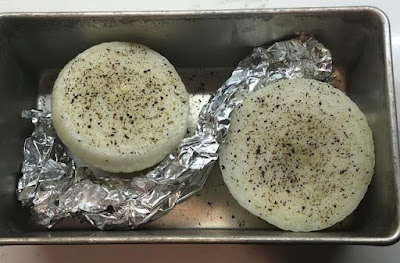 I just nestled those halved-onions in a bread pan and snaked foil around them to keep them in place.

A little salt. a little pepper - and into a 350F oven.  Technically, it should have been 425, but the turkey was cooking at 350, so I made due. The onions would have to cook longer.

At 425, they should cook for 20 minutes where then you'd brush the tops with butter or oil.  And puh-leese, it wasn't going to be oil.

I forgot a picture of the buttering, so forgive me, but I know you all a vivid imagination.

Then they go back into the oven for another 40 minutes. At 75F less than the suggested 425, these times are obviously longer. I was just eyeballing everything. 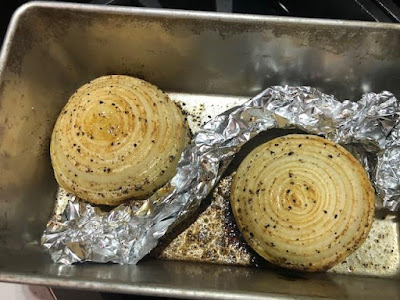 This is how they came out. I think ok - or how I supposed they'd turn out. I guess they were sweet-ish. No harsh onion flavour anyways. They didn't taste as buttery as. thought but maybe I didn't use enough? Maybe they weren't supposed to taste that way? 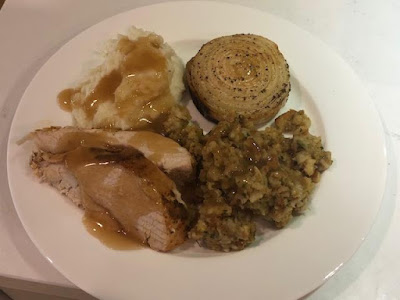 They complimented the meal for the most part. I don't know I need to repeat this any time soon, but it was a valiant effort.
Posted by Blobby at 12:07 AM

A valiant effort Blobby also considered in this you’ve had sinus surgery. I like garlic and a hundred years ago a friend gave my mother a recipe. It’s for a cheese log . Needless to say the garlic is the star. Happy Black Friday. Except for the day Biden smashed orange adipose everyday has seemed a tiny bit black since March! I’m a happy man and I slept all night last night, enjoy the rest of your all’s holiday!

I ate lasagna yesterday, spouse had turkey. I cannot imagine you cooking after just having had surgery. and your taste buds may still be off due to said surgery. but you got to be at home with 710 and the furkids, so all is good.

Nice. I, too, love sides. All the ones you mentioned. Yum. And onions. I have come to love them. My favorite thing is Naan bread, toasted lightly to make it come alive, spread some humus, a thin slice of tomato and then onion bits and pcs. Eat it over the sink, because it is a difficult eat... but, yum... and rather healthy. I like garlic Naan. And I mess about experimenting with different humus. This is my go-to lately when I don't want to actually cook anything. And the onion is what makes it pop and feel healthy. I am going to try your cooked onion side. It looks delicious. Thanks for sharing. PS. Had a cheese pizza with my Mom, with a salad and a nice pinot grigio. Walked some over to my ex. Later had tofurkey and mashed taters with the boyfriend. He overcooked the tofurkey, but I ate it all up, as I appreciated the gesture. Enjoy the long holiday!