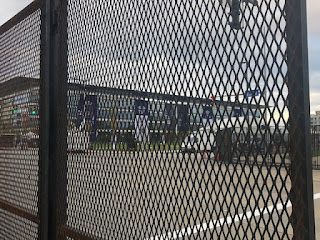 No, I did not go to the debate.  No, I did not even watch a second - or even a nano-second of said debates. I told you I wouldn't. I actually couldn't.

Streets yesterday, the morning after, were still closed. Barricades everywhere. I walked by the debate site in the a.m.

A co-worker texted me two articles on the debates as I was walking by the fencing. She knows my thought on the 'no news' but insisted that the Guardian article was 'very good'.  Maybe it is. Maybe it isn't.  I kept the link but I'm not jonesing to click on it. This would raise my anxiety level unnecessarily, as I have mentioned, it's a bunch of blather where not one voter will change their mind.

Allegedly it was so bad, that the Debate Club (or whatever it's called) will change the format due to BLOTUS' interruptions.

Oh - how I laughed at that one.

As if that Orange Fuck is going to abide by their rules, or call out saying someone is trying to infringe on his First Amendment rights. He's had one debate with Pappy Joe and three with Hillary, never ever ever abiding by the rules.  For fuck sake - cut. off. his. mic.   It's kind of simple.

Honestly, would anyone blame Pappy Joe, if he just said, 'no. no more debates'? The BLOTUS voters would call him a coward, of course, but it's not like they were voting for him anyways.

710 said he watched a little of the debate after I turned in. He's not one for cussing - unlike yours truly - but he said it was a shit show.

He also says others have called it the same.

Yes, he even read about it.  I did not. I could not. But Luke Skywalker concurs with 710.

.....and in keeping with a Star Wars related item........the debate may have killed Helen Reddy. 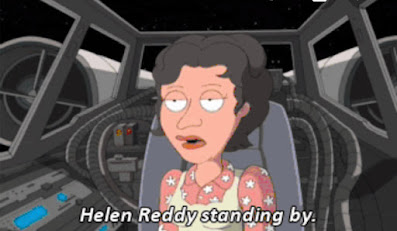 You can't prove me wrong. You weren't there.

Out of respect for anxiety, I think you should control your environment as much as you can . It certainly was not the biggest shit show or anything monumental. It was all the wrongs and Ills of four years condensed to 90 minutes. Joe looked Presidential, maybe not, but by not backing down he seemed very mentally fresh and eager to try to fix America . We both know that thePresidency is always in motion. It’s fluid.
What this debate, which I only touched on snippets did, was assure me we can beat BLOTUS, hold on and begin the task of moving America forward, restoring respect to the presidency and regaining respect from Our allies, who thankfully are sympathetic. America is broken, but not destroyed and the person who is responsible should be punished. Just get him out of my fucking face everyday, and I will gladly blow every healthy male Democratic voter with a permission slip and a negative Covid test!

I skipped the show. Joe did get to say the one thing so many of have wanted to say for nearly 5 years, "won't you shut up" actually I would have said it, "won't you shut the fuck up!" but Joe is more of a gentleman than I am. I ordered the T-shirt already.

I watched the whole thing. And yes, it was a triggering event. I yelled at Joe the entire time. He's so old. He needs a coffee enema. And cutting off the mic is one of the proposed changes. They should also put him in a glass box. Damn freak. If he is going to act like a twelve year old girl, they should treat him like one.

Helen Reddy. Don't laugh. When my Mom told me she passed away I burst into tears. She meant so much to me. I know, I know... she was everything I was supposed to dislike - but I adored her. Her No Way To Treat A Lady album is one of the most perfect slices of MOR ever... every song a treasure. She had a knack for finding songwriters. She failed to change course in a timely manner a number of times, and ended up something of a punchline (for a time), but no one sang like her - such odd phrasing, so forced through her central sinus... but she could toss off a swaggering aside so well. I heart her and miss her.

I didn't watch either; no reason to, uncle joe is my choice. I know what uncle joe stands for.

A view from afar - I did watch the whole thing, getting up at 1.30 a.m. to do so.
Interesting the next day on finding that the balance of reviews were favourable to J.B., if only slightly. It was the first time I'd seen him speak at length - or attempt to - i any context. The constant interruptions were, of course, insufferable so it was a surprise to find that his aggregate speaking time was actually five minutes longer than the other's, though much of it was trying to get back to the subject they were being questioned about after being [very] rudely side-tracked by the other. I was a bit surprised and a trifle embarrassed at the number of times J.B. stumbled over finding the right word. At such moments he seemed to show his age, which wasn't so with the crazy, bumbling other. But I've yet to see anyone even mentioning that point, so it may be that that that is only expected of him these days. My final verdict, and despite his plain lack of manners, I'd have given the 90 mins to the 'other' so I was a bit relieved to find that practically no one, apart from the other's avid and most manic supporters, found it that way. Indeed, it sounds like the event may well turn out to have been the other's definitive undoing. [Fingers, toes and everything else crossed].
Now if only Penisce can be made mincemeat out of in two weeks time, which shouldn't be too hard, I at least can take a much-needed first, tentative sigh of relief.

Format solution: candidates on elevated platforms. One microphone, with cutoff capability at the bottom of a 2:12 ramp from each platform. Candidates have to remain on their platforms, locked in a soundproof booth while the other is speaking. Glasses of water to remain at the elevated podiums.