We Don't Get Along 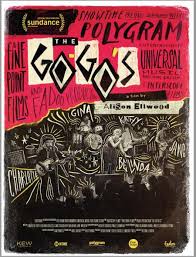 Remember how I said I wanted to see the Go-Go's documentary, but it was on Showtime, but we (along with about 329 million other people) don't get Showtime?

I assumed I'd see this down the line, but as it turns out, the place we rented on vacation had Showtime. So.........why not take advantage of that amenity?

The good is: it was well made (hold on to that statement for a few). It was done more professionally than the VH-1 Behind the Music one they did like two decades ago, albeit with less humour.

The filmmaker did a good job covering their pre-debut album days. They hit all the original members who left or were fired (manager included). They got Miles Copeland, who managed the Police and signed them to his record label and their original producer too. All done nicely.

Then things started to speed up and get glossed over. They touched on how badly Vacation their follow-up to their wildly popular debut, Beauty and the Beat, was handled due to lack of time, but they never truly went into it.  (My own opinion:  it is just a horrible horrible album. The band itself said, if it wasn't for the title song, they'd have been finished as a band right then and there. And I agree.)

They somewhat cover the third disk, Talk Show, a bit more, but not so much the disk as the surroundings of making it. As it was to be - for all intents and purposes - the end of the band. Financials and infighting did them in. Jane Wiedlin had decided to quit the band before the record was released, but didn't act upon it until after the tour. Then Charlotte Caffey and Belinda Carslisle just walked away.

Somewhere between that was a slight interesting tidbit. The person to briefly replaced Wiedlin got Caffey into rehab for her decade long heroin addiction and would end up co-writing most of Carlisle's deubt solo album, including "Mad About You" (which would have been on the Go-Go's next disk had they stuck it out).

Nor was their discussion or even a vague reference on the reformed band firing KathyValentine and changing their LLC so she would not get any future coins. It was a lawsuit that lasted a few years before they rehired her.

They at least address Caffey's heroin addiction but not Carlisle's three decades of cocaine and alcohol addiction. Nary a word.

I think the filmmakers did a bad job with editing that last third of the movie, or maybe they just didn't bother filming / touching on 2000 and afterwards at all.

Why bother doing the movie at all if you're not covering the journey?

Song by: the Go-Go's

I bet Carlisle got them to agree not to talk about her eating, drugging and drinking in exchange for her cooperation. I saw her last summer at the MN State Fair. It was a hit and miss affair... she had a great band... but Belinda, sigh... sometimes she couldn't find a note to save her life. Great energy and she looked amazing - a total crowd pleaser. The low note - We Got the Beat - NOT ONE SINGLE NOTE - The band leader was feeding her notes and nope... nada. I don't know where her head was at. It was shocking. And of course the crowd - they didn't care. They stormed the stage and danced like she was golden. Love me my Go-Go's and their fourth album, like their third? Terribly underrated.