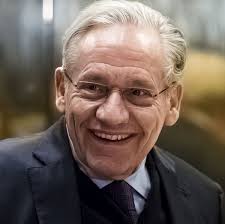 Why the actual fuck would one purposefully sit down with Bob Woodward?

It's like Mike Wallace knocking on your door and letting him come over the threshold.

But it comes down to one word: Ego.

BLOTUS clearly thought he could control the narrative.  Clearly he could not. Honestly though, what good can come of it. And Woodward already trashed him once. Who thought this a good idea - let alone with a tape recorder.

Truth be told, I haven't read much of this because....well...BLOTUS. In theory it's like xmas came early.

I condone nothing here - nothing - but I almost get the February discussion about how bad Covid really would be and his claim of not telling that to the American people so not to incite panic.  Hey! I said "almost".  But it is one thing to withhold information, and one to blatantly lie about it....x 10,308.

Yes, I get it's a thin line, but he steamrolled right over both of those.

I do like the one of calling "his" generals "pussies".  A draft-dodger. One with a secret plan to eliminate ISIS in 30 days {which I am still waiting on}, due to the fact that he knows more than the generals.

But Woodward's problem with Rage, his new books, where he has all these things BLOTUS has said on tape (!!), is the same problem he had with Fear, his last book on the same subject:  great bullet points, nothing happened because of it.

Of course BLOTUS voters will think that the generals are pussies. They already think Mattis.  They already think it of Kelly. They seem to forget that BLOTUS picked the latter. They forget he selected the finest and fired them - and it all of those guys who were morons.

There might be 0.005% of voters who might listen to the tapes and think, "nahhh, I'm not gonna vote for him". The rest?  They'll be unswayed.

It's a very sad, and very harsh reality.

I FEAR he will skate, I will trip him , when he least expects it!

Love Split Enz, love Crowded House. You're absolutely right. The orange ogre is teflon... nothing sticks. And Woodward's book is just more noise added on top of all the static we're putting up with these days. Sad. So much of what can be attributed to the orange ogre would have sunk anyone else. I cannot figure out why this is. But it is. I have a feeling it is about the south and racism. He speaks to those people. It's an ugly little tea party.