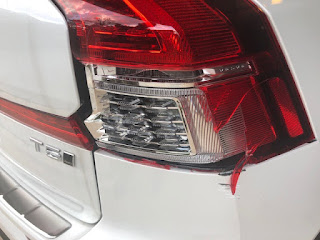 I'm not necessarily one who abhors change. I am sure I don't feel rigid.  I'm also 91% sure other people would disagree with me on this.

I have one true pet peeve, and that's being late. For the most part, I don't mind if others are late (well, to a degree), but I hate being late.

A former COO I worked with, who was military all the way, would say 'if you're on time, you're late'. I'm not sure I'm that bad, but I got his gist.

The problem arose when both "our" cars were out of the garage. Over the weekend, a skunk sprayed the outside of the garage and everything inside smelled, including his car. "My" car was a loaner from the dealer, as mine is actually being fixed.

The loaner is just slightly bigger than my current one. It turns out - size does matter.

With 710's car out, I had less maneuvering room - which pitted house against car.

I know you think that white is the reverse light. It is / was not. It had red plastic all around it. Had. Past tense. What you don't see is the scrape on the car too.  Fuck me gently with a chainsaw, Heather.

This served me well to deal with people who needed, let's say to be dealt with a firmer hand.

However, the joke was on me. Upon getting to the loaner in the parking garage, I had a ticket. The car was not displaying my hang tag from the rear view mirror, as I left it my actual car.  Mind you - there have been dozens of times over the last five years where that thing isn't hanging and not one ticket.

Granted, I can appeal this, and no doubt "win", but it was just the cherry to the day. I actually did laugh. Sure, it was an evil henchman laugh, but a laugh nonetheless.

Then after the dog walk, there was this. 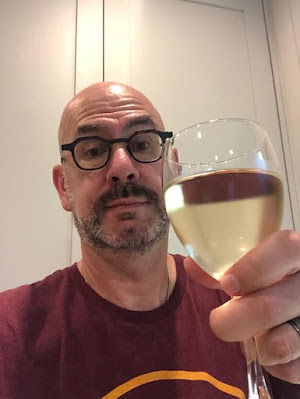 Honestly, I almost never drink during the week, but it seemed to call for it.  ....and I answered that call.

I'll deal with the car dealer later this week.

On your pet peeve I'm with you all the way. Keeping another person waiting, either intentionally or through oversight, is much the same as STEALING from them.
When I lived in Cologne for a few years three decades ago, a German friend of mine had his boyfriend from California over to stay with him for some months. It was a constant source of annoyance to me the number of times he and I would make an appointment to meet up - in a restaurant, outside a cinema, at a given spot etc - and he would ALWAYS keep me waiting for easily an hour or more, and then turn up nonchalantly with no apology. Whenever I confronted him about it his answer was always that I must remember that he's a 'typical' American and that they [Americans in general] take a much more relaxed view of such things. I never believed it then and I certainly don't now. Plain bad manners, whatever one's nationality.

Sorry you had a bad day. Sucks. I can't believe you're out and about and navigating the world. Good for you. I'm still in my bunker... since March 9th. I have a thing about not drinking during the week, too. But have broke it a couple of times because sometimes... you just need that little lift! Better days.

@raybeard - that yank was using a piss-poor excuse. there is NO excuse for keeping someone waiting.

cripes, you NEEDED that drink! hope 710 and shep and sophie were of some comfort to you also.

7 am webinar? I assume you were the only one there??? Yeah it’s JP here.

I will freely admit I have missed you JP. And i was the FIRST on there, but I ended up with about 30 attendees. Eventually.

most sensible of you; you deserved a nice glass of vino.