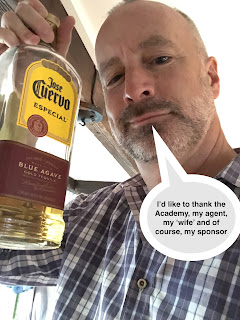 With work, travel, Ginsberg, Covid, General Death and Destruction, Mike and I kind of let the Emmy competition slip away from us.
I mean, I shot him a message first thing Sunday morning with an "OMG" text. It's not like he responded right away, with an "IKR" one, but........such is the commitment (or lack of) to this relationship.
So we have no witty remarks to share with you regarding our selections, as we had few even amongst ourselves. If ever.
As it turns out, the area from which I copied the nominees weren't even the entire list, so we kind of agreed to do was that list - though neither of us were jazzed about doing it at all, I dare say.
I didn't go Schitt's Creek crazy, so there was little chance of me winning, but good for that show for pretty much cleaning up - though their mask use at the show was horrible.
We attempted to watch the award show via text, but without great success. We both trailed off and not one of us mentioned it to the other.
DRAMA SERIES - Both won
COMEDY SERIES - Both won
LEAD ACTRESS, DRAMA - Both lost
LEAD ACTOR, DRAMA - Blobby
SUPPORTING ACTOR, DRAMA - Both lost
SUPPORTING ACTRESS, DRAMA - Both lost
LEAD ACTRESS, COMEDY - Mike
LEAD ACTOR, COMEDY - Both win
SUPPORTING ACTOR, COMEDY Mike
SUPPORTING ACTRESS, COMEDY - Both lost
LIMITED SERIES -Both won
TV MOVIE - Both won
LEAD ACTRESS, TV MOVIE OR LIMITED SERIES - Mike
LEAD ACTOR, TV MOVIE OR LIMITED SERIES - Blobby
SUPPORTING ACTRESS, TV MOVIE OR LIMITED SERIES - Mike
SUPPORTING ACTOR, TV MOVIE OR LIMITED SERIES - Blobby
COMPETITION PROGRAM - Both won
VARIETY TALK SERIES - Both lost
HOST FOR A REALITY OR COMPETITION PROGRAM - Mike
Mike prevails: 5-3.  Bragging rights are his only prize.  (psssst....he does that even if there isn't a competition between us.)
I dare say - with the lack of movies this year, I don't know how our Oscar competition (our would-be 10th!)  is going to go. As it turns out, Elizabeth Moss is a shoe-in for Best Actress from the never watched, the Invisible Man.  Alas, there is no other competition for that category as of yet.
But I would hate for Covid to stamp upon our decade-long tradition. I guess we shall see.
Song by: Pet Shop Boys
Posted by Blobby at 12:07 AM

I was so happy to hear that $chitts Creek swept all the comedy awards... as it should. It has some of the best writing - although a little pat on occasion - and of course Catherine O'Hara... could not be happier for her. Looking forward to the new season once it gets to Netflix. I don't care much for award shows... haven't for quite a long time. Of course, I don't have the patience to watch TV the way I used to. Typically - it must be a Friday or Saturday evening with a cocktail and the boyfriend. Enjoy your day, dear.

All the Veterans from the Second City Television troupe getting their awards , like Catherine O’Hara and Eugene Levy are delighting. The fact that Dan Levy was able to showcase Them, with his talents and bring attention to the gays is stupendous!

You can be proud of them for their safety too! They love each other so much that Dan Levy, Eugene Levy, Annie Murphy, Catherine O’Hara, Noah Reid and Karen Robinson gathered in Toronto, Canada, “adhering to Ontario’s COVID-19 guidelines.” “All in attendance have been in isolation since returning negative COVID-19 tests,” the “Schitt’s Creek” Instagram account added.

Where to start? Thank you, thank you, and thank you. You like me. You really like me! This is an exciting win - almost as exciting as mocktail time at the Pence household when Mother serves warmed milk and graham crackers.

I must say I wasn't totally surprised to see the prep for this year's Emmy's competition slip between Blobby's greasy fingers. I mean, with all of the prep required for his beach vacation and then the tragedy of enduring a microscopic cut on his foot, could he really be bothered with tradition? Seems like my hours of research into this year's nominees would be wasted, especially when I (finally) received my (truncated) ballot.

But I soldiered on -- pretending that my feelings weren't hurt - and filled out my (truncated) ballot anyway. I almost mailed it in, but we all know there is a vast effort to invalidate mailed ballots this year.

Anywho -- it was obvious that Blobby was hitting the (Metamucil) bottle on Sunday night. His texting was erratic. A few zingers, to be sure, but I think were were both feeling antsy and a little bored by all the commercials, and honestly, I was still a little bothered by the (truncated) ballot I had received.

But given the results posted above, I had nothing to worry about. Seriously, one must wonder if Blobby just throws the proverbial dart at the proverbial dartboard to make his selections. Once my tremendous lead was cemented (thanks, Schitt's Creek!), I felt safe going to bed and dreaming of my victory.

I'm sure that on a future visit to Boston, Blobby will grandly and gladly reward my win with a gin martini with (hand-stuffed) blue cheese olives. I salivate at the thought (of the martini, not the visit).

Onward and upward, dear Blobby. And don't let the Emmy hit ya in the ass on the way out the door!

Good cheer and thanks.