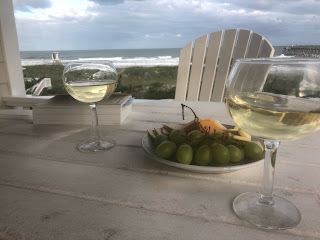 I met former co-workers for socially distanced drinks, and yowza, I killed an entire bottle of wine on my own, since no one was sharing anything of any kind.

There was food, and the four of us had individual gift bags of gear to eat things on our own, but for the most part, no food was consumed.

I was too busy making friends with an eight year old golden named Rosie. She picked me for the sucker who'd pet and not stop - and she was correct.

Yet glass, after tiny glass of wine went consumed until the entire bottle was empty.

Luckily, 710 came and picked me up and chauffeured me to an thai restaurant and then home.

Yet it's far too late, and I'm far too inebriated to be bothered with an official post.  Sorry.

I don’t think this is a year or time of year that requires apologies. Alcohol is its own punishment and it’s own reward. Just think your new dog friend , loved every minute of it and you had a designated driver!

Well, we all have days like this and they are as important as any other... everything shared is a total treat. So... this is an official post. And a very worthy one! You're going out to eat? How brave.

hope the wine was dee-lish!