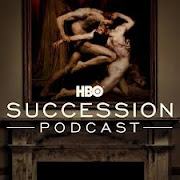 I am not really good about writing about podcasts monthly. Truth be told, I'm not very good at listening to them either.

The idea was to take them in at work, but some of them are soooooo long. Not just in number of episodes, but time per episode. My ADHD brain cannot and will not focus that long.

For those who have not watched HBO's two seasons (so far) of Succession, I, once again, highly encourage you to do so.  It just won the Emmy for best drama tv series or something, and one of the leads, Jeremy Strong just got best actor for playing son #2, Kendall.

So, I was hoping the podcast would be good. And it is, and it isn't.

A. There are only two seasons, so how many episodes could there possibly be? (there are eight as of now.)

B. They are not breakdown of every single show, which could work well, as the dynamics of some of them are worth the look-see. The family interactions are so complicated, sad and funny - sometimes all at once.

C. At least for the first eight, they're talking to the biggest characters 1:1. This is all done in a Covid era, so all interviews are via telephonic devices.

The problem with the podcast is that it's not really for the folks who haven't seen it, which kind of makes sense. The interviews have spoilers, so that defeats listening to before watching.

I'm only halfway through, but each episode is and isn't different. You have the overly fawning host - and he is OVERLY fawning and you have the characters.

All bring something to the table, about method, involvement and how they came to the role, but it struck me that Jeremy Strong was exactly how I thought he might come across:  having quotes at the ready from Jung, Olivier, Hoffman (Dustin, not Philip Seymour), Agassi (yes, really) and references to a Jared Diamond series of books..........or and of course, Hamlet.  It was all a bit over-prepared and a bit pretentious. The others seemed to have more fun with this.

But given how fucked up and broken Kendall is, I suppose Strong has to dig deep to be that shattered for the character.

The whole podcast is interesting enough, but not nearly as much as the show itself.

I am always on the look out for good podcasts so what you recommend I go have a look-see.