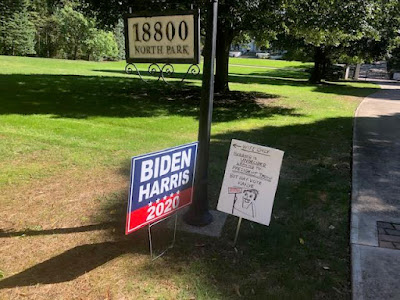 Does it even matter if BLOTUS called fallen soldiers "suckers" and "losers"?

First off - it not even beyond the realm of possibility or probability that he would have said this. This everyone knows.

For fuck's sake during the 2016 RNC, he demeaned a gold star family and in turn, their dead soldier son. He treats his generals as nobodies who do not know a thing. I think the bigger surprise would be if he didn't say demeaning things about the military dead.

Secondly - do we think anyone who is supporting this doofus is changing their mind over this, even if they don't spout the phrase "fake news"?

Honestly, I see no need for debates. This is not an election of undecided voters. Who are the 14 people out there that are on the fence one way or the other about this guy?

Well one - is Geraldo.

He and his 4th (?) wife live about two miles from us. Lucky lucky us.

The above image is of the front of his driveway. WITH a Biden sign. When a friend told me of that, I didn't believe him so went to see for myself.

So there is a sign. Two. The Biden / Harris one most certainly belonging to his wife. The second one, hand made - possibly by Geraldo himself..........saying he's undecided.

First, he works for FOX. It's a well known fact that Roger Ailes' ghost votes for everyone who works there, so not voting for BLOTUS is not really an option. And even if he's not joking, a vote for Kanye is a vote for BLOTUS.   .......except for the fact that Kanye didn't get on the Ohio ballot.

And FOX has another problem: they verified the story of the demeaning things BLOTUS said about dead and amputee military personnel. Doesn't that kind of put them in a tough position?  Either not report it at all, or report it and play down BLOTUS' comments, which puts on in a pickle with military folk; or berate BLOTUS - which I don't see happening.

As always, the problem is: "unnamed sources".

I am glad the Atlantic, Washington Post, New York Times and now FOX has all these stories verified. But where the fuck are the military leaders, currently in position right now who have said nothing on record?  Is it so important to keep your job that you give up the honour you of which you say the military proud?  You'd rather take it up the ass dry by a president who dodged his draft than to stand up for the now dead and future dead soldiers?  It's pathetic.

So while, naturally, I believe he said all these things, it won't make an iota of difference to those who were going to vote for him in the first place. They don't even care about the lie of his lie.

And this folks, is one of the reasons (if not THE one), why my anxiety runs high.

Song by: the Decemberists

"No one in history has more respect than me for:-
War veterans
POWs
Our brave, fallen heroes
The American Constitution
The Rule of Law
Our system of government
Our electoral system
Our great police
Our right to bear arms
The right to demonstrate
The Bible
African-Americans
Women
The Truth
Money
My family
Russia
The KKK
etc etc......."

Did I leave out anything? Oh yes - ME!

ewwwwwwwwwwwww, geraldo stink! is he still looking for the contents of al capone's vault?

Geraldildo is an opportunist. Such a jerk. As for the military leaders staying silent... I think that's a travesty, too. But if they speak up, they could be accused of leading a coup. The orange ogre is so stupid, I am just waiting for him to choke his foot once he's put it in his mouth. That... would be justice. One would think disparaging military families would be enough... but, as we saw in 2016 - that is not the case of his demon hoard of deplorables.

Distress or uneasiness of mind because of fear of danger or misfortune! That’s a generic definition of Anxiety. These are uncertain times, your
Concerns are not unfounded. We can’t will people to vote how we would like them to. As a long time sufferer of anxiety. I was told walk two miles every day , balanced diet , no caffeine or alcohol! I Have found Over-Preparation for whatever life event is Causing The anxiety makes it manageable! The times are impossible but I believe if you look back , at some time you will find you survived worse and came through it!
Geraldo is a slimy lying pig!