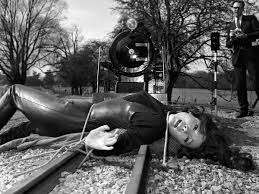 I had a post planned - well, in my head - for today, but things change.

James Bond's only wife is dead.

And with her, a part of my childhood.

For those who don't know, Rigg played the woman Bond married in On Her Majesty's Secret Service. It didn't end well for her.

Actually, it didn't end well for George Lazenby, as it was his only take as Bond. That and Rigg hated him and ate garlic and onions between each take.

I've never seen Game of Thrones, so I can't tell you how she was........or who she played. While I adored her, it was not enough to endure 117 years of that show.

Me? I was a fan of the Avengers.

Let me rephrase: I was a fan of the three years which she was on the Avengers, playing Mrs. Emma Peel.

That show was just slightly ahead of my time, but I caught it in reruns when I was still a lad. It was seemingly a farvourite of my mother, so it was something we'd watch together. We bonded over that, as much as one eight year old and his mother could.  I won't lie and say I got all (or any) of the nuance, but I thought Rigg was the bee's knees.

I mean, I adored John Steed too (and loved love loved when Patrick Macnee played Sir Denis Eton-Hogg in This is Spinal Tap), but loved the chemistry those two had.

Mrs. Peel was adorable yet tough and cunning and she the height of everything that two plus decades later, Austin Powers would base so many things around.  I loved her. Even at that young an age.

Now, I'm not saying Diana Rigg turned me gay, I'm just saying, if you cannot be with and spend eternity with Emma Peel, why even bother with other women?

It was a different time. Compare "I take no responsibility" to "Mrs. Peel, we're needed."

I had the great good fortune to see her in a production of Abelard and Heloise probably in the 1970s.Wondeful stage actress too.

I share absolutely your infatuation - nay, LOVE - for her. She was an intrinsic part of my life ever since, growing up, it had been the right time for me as being old enough, to catch her in 'The Avengers' on first time transmissions. [I even recall Honor Blackman before her, for goodness' sake!]
Her rare film appearances always lifted them to a higher level, even if the film itself was mediocre. Her one scene [as Portia] in the star-heavy but otherwise unremarkable 'Julius Caesar' of 1970 is the single thing I remember - and she was one of the few positive features in the 1977 film version of Sondheim's 'A Little Night Music', even out-classing the unfortunately mis-cast Elizabeth Taylor.

Her diction was always impeccable, and her spoken Shakespeare spot-on [witness her as Regan in Olivier's 1983 'King Lear'].

I saw her in just one production live on stage - 1987, in Sondheim's 'Follies', which I saw twice.

I've not seen her in anything for what must be at least 20 years [never watched....'Game of Thrones' was it?]

Btw; Anon's reference to her, above, being in 'Abelard and Heloise', I well remember the reviews of that when it started [with Keith Michell, I recall] and all the hoo-ha about it featuring full nudity of the two titles characters. She was also nude in 'Follies', even if she was singing in a bubble-bath.

Will miss her - with respect and affection.
R.I.P. Miss Rigg. You added a rare special ingredient to my life.

To not see her performance in Game of Thrones is a shame, I didn’t watch it either but have seen highlights of her performances. I knew her as Mrs Peel as well, she was much more lethal and butch than John Steed. She was a Tony winner for Medea. She had a cat fight on film with Maggie Smith. A lot of people just die! But some people take a piece of you with them. RIP Diana Rigg

I wanted to wear mrs. peel's cute 60s clothes. the avengers was a cool show.

Right there with ya, Sir. There will forever and always be only one "Avengers" in my mind, and that is those three years with Emma Peel.