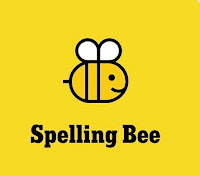 Sometime at the start of the year, I tried to wean myself off Words With Friends. I was playing way more unknowns than friends, but worse than that, I'd have dozens and dozens of games going at a time.

So weaning didn't work, so I just stopped. I didn't even finish the games I had in progress - and I gave no notification even to the actual friends I was playing.

So, I took more solitary routes of app-game playing. Lots of backgammon, but honestly, I have yet to find one I like.

710 was playing Spelling Bee via the New York Times app / subscription. He'd get faux annoyed at me for looking over his shoulder and trying to provide words for him.   .....lately, I've just taken the game over. 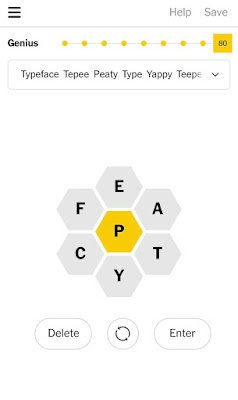 You get seven letters. You must use the middle letter - whatever it may be - in every single word. There is at least one pangram in every game. Oh - and each word has to be at least four letters long.  So this kind of like grown-up Boggle, but you only get one role of the die for the day.
Each game is only good for 24 hours. There are no more until the next day, so you can't keep playing and playing and playing.
So, while I worked this game at lunch, or if bored on conference calls, it got through the first four or five levels easily enough. I was so close to the 'Genius' level, but couldn't get there. And I hadn't gotten the pangram - and it was killing me.
I use the 'shuffle' button a lot. It only moves the letters around save the middle one, but it gives one a different visual perspective. Only when at home, and talking to 710 it just snapped with 'typeface'.  Yay. Me!
I hit the Genius level. 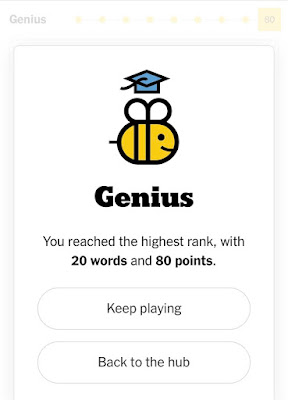 The number of words per game differ - as do the points. The number of points per word are static (1 point for 4 letters, 5 points for 5 letters, 6 for 6).  There is something beyond 'Genius' which is 'Queen Bee'.  You can go beyond the game points if you find other valid words. I haven't gotten there, nor have I tried. 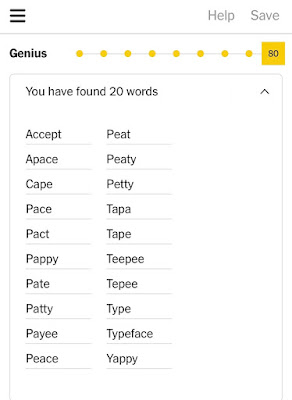 Here were the words I got. 'Typeface' got me to Genius. 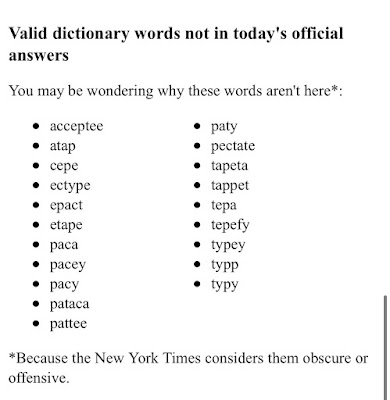 These words are real, but you cannot use. I think I tried about half of these in one form or another (knowing vs guessing vs trying anything).  I don't get why 'acceptee' is obscure or offensive.
But after you play, you can go to the NYT/Spelling Bee site which will give you info on your game (see the image right above here).  and stats about the game in general. 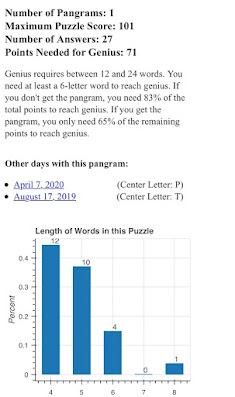 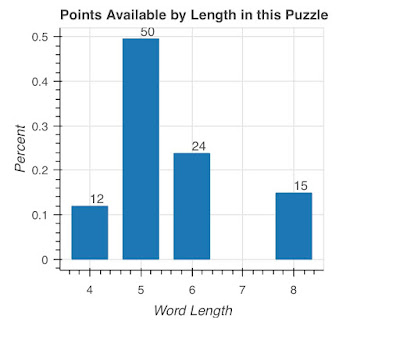 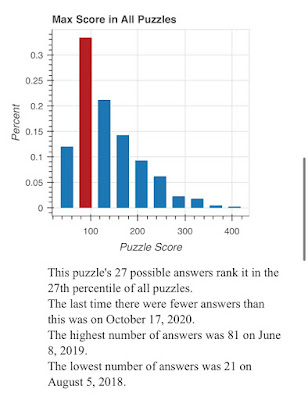 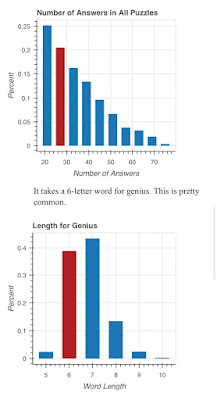 This all plays to the geek in me, of course.
And you can view this site before the game, and while it's not cheating, I'd rather not have of answers ahead of time.  While I got 20 for Genius, clearly there were another 7 for Queen Bee. I barely made it to 20, while feel like a failure of a genius by not getting the rest.  It's easier if I don't know.
The upside:  it's a solitary game, so I don't have to worry about playing others like I did with WWF.
The downside is, there is only one game per day - for the NYT subscriber. So either 710 plays it, or I do.
He's been kind, but it was his thing. I just co-opted it. Maybe I'll spring for the $39 and just play it on my own dime.
Posted by Blobby at 12:07 AM

We play the spelling bee and the crossword every day :-) What a great way to wake up. "Typeface" also jumped out at me out of the blue mid-day yesterday while I was doing something else. Fun!

Isn't it amazing how we fill our time? What we do with it? How we spend that very currency? But, if it gives you joy and hurts no one? Then, why not. I dabbled with Words With Friends. And I liked their little bot contests... but... I really needed to be doing something better with my time. Now? I blog. Which isn't ideal, but at least it's close to writing. As close as I will get anytime soon, I suspect. Have a lovely.