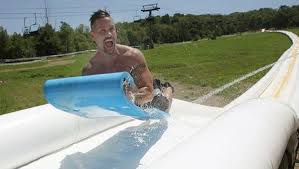 710 is a roller coaster enthusiast. I have fun at amusement parks as well - coasters included.

So he knew of Action Park in New Jersey. I had never heard of it. More surprisingly he did and it was a park with no coasters.

Even in its heyday it looked like a dump. A horrible left over county fair that went on past the week it was scheduled and stayed for years.

For the record, it was a bad documentary (mostly) about a horrible park.

I think the movie could have been good, but the filmmakers were lazy, or biased......or both.

Clearly this park and its rides were shoddily put together. It wasn't safe by any standards. The owner was not only shady, he created a shell off shore insurance company to pretend cover liability - everyone knew, no one cared. Including the state of New Jersey.

There are inferences that it's Jersey so there were mob ties with the owner. These are either unfounded or were unable to explore, so they go nowhere with this. Literally.

They make it sound like people died there all the time - and there were deaths, far too many for any amusement park, but it's not like bodies were piling up.

For me, the saddest thing is how horrible the place was with injuries, poor equipment, out of hand employees and park guests - and no one cares......even to this day.

One female lifeguard seems to show some concern on how it was. But the men? They revel in how horrible it was and smile through the injury and death stories. All interviewed just saw the place as some kind of right of passage, and none took responsibility.

I thought this might be a crazy romp with good stories, but they weren't. It was just sad - like the park itself.

Oh - and since there was no class action law suit, the film title is kind of misleading.

never heard of this park either. off to google!

Huh. Amusement parks are dangerous? Who knew. But then, who knew walking around without a mask in the White House could leave you open to getting the Covid? Will wonders never cease?