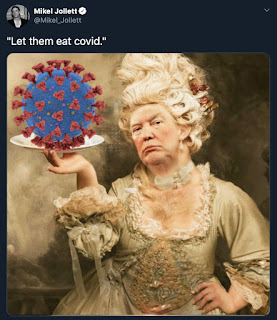 I'm breaking a self-imposed, never discussed rule of never really posting video of the "president" - at least this one.

Hopefully, the next video I post of him will be of him leaving Washington DC............or being taken to Riker's.

Yesterday, I got home in time for the national "news". I have REALLY been avoiding most print and television media stuff. But 710 likes to see it now and then - so there we were, turning it on five minutes in.

BLOTUS, being BLOUTS, is discharged right at national news time - which I don't believe for two nanoseconds was a mistake.

Lester Holt and NBC, whom I used to like, now I find has no dignity whatsoever, on what they opt to report, just cut to BLOTUS not just leaving Walter Reed, but we watch the entire flight back.  Yes, they totally bagged any other national news................or a long range camera shot of a helicopter.

The one thing they did broadcast before they cut to that, was the fucker himself.  I swear, I almost swallowed my tongue.

What. The. Actual. Fuck.
This fucking shit for brains heard of Covid back in December 2019.  NOW - he says he just "learned a lot about Covid"?
I'd ask if he could be more disrespectful of the 206,000 dead, but we all know he can - and will - be.
While I do wish he would die - and soon - my friend Morty is correct, we cannot let him be a martyr. We will NEVER hear the end of that shit.
Song by: Lucinda Williams
Posted by Blobby at 12:07 AM

I’m more involved in news day to day, it seems to be sucking the marrow from my bones. I look forward to November 3rd and the eventual exit of this ridiculously stupid person from any sort of platform. I. Always . think his corpulent goose is cooked . It clearly seems like no one could tolerate such heinous behavior. We will all watch and see. Hopefully with a quick dispatch of the worst person ever to live at 1600 Pennsylvania Avenue.

the WH is a hot spot for COVID-19. assholes gonna asshole.

one of his aides was out offering up the argument that now that the orange ogre has had covid - he is the better to serve as our next president. Huh? Dumbass got himself infected. That is not a positive thing. Shows stupidity. But nope... the spin is in. As for NBC filming the whole coming home thing? They were hoping the helicopter would crash or that he would collapse walking up those steps. Me? I'm still holding out hope :)