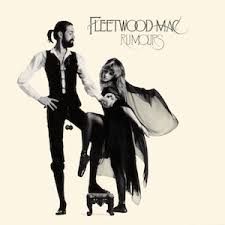 Clearly, I don't get viral anything - not even Covid. I mean in terms of internet - what goes viral, and better yet -why.

Fleetwood Mac's "Dreams", and the album from whence it came, Rumours, are back on the charts.

The song is simultaneously #1 and #4 on iTunes songs (from Fleetwood Mac's Greatest Hits and Rumours, respectively)

This is good news for Stevie Nicks and her accountant. As the songwriter, she will make much more coin off this than her current and former bandmates.

So back to the viral thing.

This resurgence for an album and song that is 43 years old (!!!!) is due to a man, on an unseen skateboard, being pulled along by a truck / car while the song plays and he swigs Ocean Spray cran-drink. And he lip syncs one line in a Tik Tok video that is all of 23 seconds long.

And I don't know why. Or care.

Neither does Stevie Nicks or her accountant. As long as the royalties keep coming in.

However, since I'm guessing the average age of a Tik Tok audience is far less than the 43 years the song has been out, kerjillions are hearing the song for the first time. "Dreams" got 8.5 million streams last week, many of them the first time for most of these services users.

Granted, it has aged very well, if I say so myself.

43 YEARS? fuck, we be old. still sounds fresh though.

And the music still has an amazing flow

I was expecting the cowboys thumping their junk in a rumble? It’s hipnotic (see what I did there?). https://www.thepoke.co.uk/2020/10/05/viral-video-of-dancing-cowboys-set-to-fleetwood-mac/

I love it. Have not seen video nor do I do Tik Tok. But timeless music will always rise to the top. How cool. I love these little blips on the Billboard charts. I can't believe it was 43 years ago, though. WOW. Time flies.