I think it's safe to call me a cynic. Trust me, I've been called worse. WAY worse.

I just don't truly believe a thing that comes out of the White House - and now Walter Reed.

Maybe that twat of a man does have Covid. Maybe not.

Maybe he told people he had it to connect with the common person. Maybe not.

If it keeps him off the campaign trail for two of the four weeks left, I'm fine with that. If he were to drop dead tonight, I'd be sleeping soundly.

I am hyper-cynical enough to think that this is all a distraction from Melanoma's comments on xmas - or at least its decorations.

You can fuck with the Evangelicals only so much - but you don't fuck with their saviour's b-day party. In theory, this could piss them off more than a 'happy holidays' Starbucks cup. 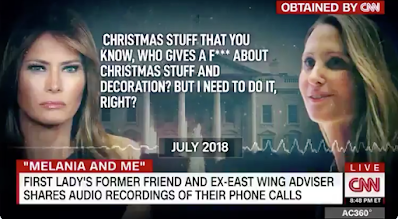 I have never been one of those people who might go, "oh poor Melanoma.".  This wench knew what she was getting into. Kind of. I mean, I don't think she'd figure out if BLOTUS dies she's going to be inheriting crushing debt...........but that's on her.

For me, I think it was her follow up comments that were more abhorrent. 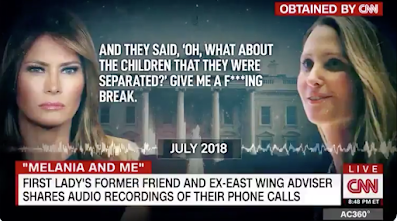 Everything BLOTUS & Co have done spoke to their disdain of these children and their families, but I don't recall them saying it out loud. It really quite stings when it is verbalized..........even from an immigrant herself.

Oddly, the GOP in any other time probably wouldn't care about such verbiage. However, this is a month before the election. Captive children might not play so well, but what the fuck do I know? Or maybe it won't play from a Slovenian Slut Dreamer.

I'd say we'd know our fate in one month, but that isn't going to happen unless BLOTUS has a landslide victory. The rest is going to play out in the courts for much longer than Bush v Gore. So we might not know until the first of the year.

My stomach, heart and mind might not be able to handle that.

Maybe they'll all kick the bucket.

"If he were to drop dead tonight, I'd be sleeping soundly." - me too. FUCK HIM!

and melanoma is just as bad/evil as he is. cut from the same cloth.

ya gotta wonder now how many people were infected at your workplace this past tuesday evening.

I see this as the “Great Denier” ,having the Covid -19 reality ,shoved into every bodily orifice! They can spin it six ways from last Tuesday, but it’s all gonna come down to- Who’s is gonna get rid of this pesky virus and Peskier person. This, before he destroys us all in the new ways-he’s invented this week! Game over- Biden wins by November 6 th.

I checked, no good news this morning,

Every morning now I hope to wake up to the heading, "TRUMP DEAD." But like with everything else for the last four years, I wake up to disappointment.

He is the super spreader event that just keeps giving. And 'Melanie'... dear LAWD. I love that she has that attitude. Explains why she tore up the rose garden, too... getting rid of all those historic roses planted by other first ladies. We should just start calling her Honey Badger, because she does not give a shit. :)