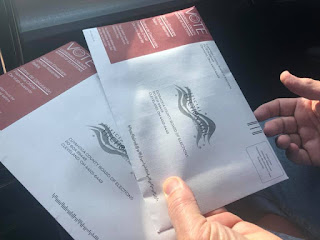 Our 2020 ballots have been hand-delivered to the county Board of Elections.

We got said ballots Thursday. I quadruple checked just the Presidential ones before, and then again after, filling in the oval. One can take no chances this election year.  None.

Each of Ohio's 88 counties gets ONE drop box per. That is is.

Fine for a small county that has less people than all of Cleveland itself, but for ours - which is the first or second most populous - it's problematic. And it seems, short-sighted.

But our republican-led state government does not want to make it easy to vote, even in a pandemic year.

While I know THEY have thought about it, I'm guessing voters haven't played this all the way through:

A probable record year for voting. Which not only brings lines anyways, but now everyone "supposed" to be six feet apart. The lines will LOOK massive, more so than they actually are. This will deter people from getting in the line as they snake out the door and down the block..................in November.

Let's add to this - more time. I don't know the logistics (yet), but you gotta believe someone has to wipe down each voting booth x amount of times between voters.

And the current "president" and his cronies have already tainted the voting by mail pool. I don't think it's real, but, the seed of doubt is now out there. Fuck, it's one reason why we didn't put ours in the mail. We drove down, we waited in a line of cars who were doing the exact same thing.

But no - our state government says voters cannot drop a vote into a secure box. Because why would they want to deny people the opportunity to easily cast their vote unless they knew it wouldn't benefit them.  Obvi, limited voting also represses GOP votes, but I'm guessing it must be at a lower rate. I have to believe a republican led state has done the risk analysis on all this.

This is why  - one of the reasons - Election Day should be a national holiday. Options.

I had to call the Board of Elections this weekend to see where my notice for training might have gone. I am still hellbent on being a poll worker on Nov 3rd.  I have taken the day off. I'll be happy to work from 06:30 - 20:00 to make sure people have the chance to cast their ballot.

I don't lie, of course I care if the vote is for BLOTUS or Pappy Joe, but I'd rather they be given the chance than shut out of the opportunity to even have a choice.

So my vote has been cast - per se.  I wish I had this great feeling of relief doing it, but so far, nothing. If anything, I probably sniped at 710 part of the afternoon after doing dropping the ballot.

our mail-in ballots are already back at the county elections office. we got them thursday and returned them on friday in person.

Early voting at my local government center opens on the 14th. I'll be there.

Election angst has surpassed covid19 anxiety in my patients.
we voted too.

I sent mine in a week ago. YAY. So excited. I'm feeling hopeful. Which is scary. Because... you know... last time. Ugh.