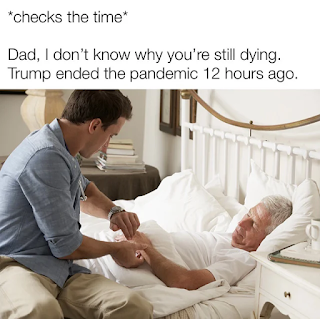 I should write something.
BLOTUS - just in time for the election - has claimed the accomplishment of ending Covid as a pandemic.
Honestly. I shit you not.
I'm not sure then how he and the White House explain the 83,000 cases in one day last week.  Or the 40% increase in cases from the week before that.
Ohhhh....wait.  They don't explain anything. Yet people eat this shit up like candy. And if they don't believe it, they certainly don't question it.
Mind you, this is the exact same administration - his 117th Chief of Staff (he picks only the best people!) said, and I quote: "we're not going to control the pandemic".
Oh - how I laughed.
It almost implies that they, at one point, tried to. If someone can get me the data on when that was, I'd be happy to read it over.
This administration will fuck you over without a thought yet.........people are turning out in record numbers to vote early.  And as much as I would like (read: hope) to think it is to vote him out, you have to believe there is equal fervor to keep him in.
Allegedly Texas' early voting is surpassing all their previous voting numbers - and I'm not talking just the early portion. Since it's Texas, I have to believe it is to keep this turd in office.
I don't know how Kool-Aid stock is doing, but I gotta figure it's up like 471%. So many people are drinking it, how could it not.
I have nothing to base this on, but I have to feel I'd like Jim Jones more than I do BLOTUS.
Song by: Aimee Mann
Posted by Blobby at 12:07 AM

There are a lot of voters, there are people trying to stop voters. I know we as a country know, BLOTUS is a fool! I am not leaving my hopes and dreams in plain sight. I hope there are more people who are smart ,than stupid!

did you see junior's COVID comment last night? in what fucking universe do these fucktards exist?

Trust me... all cult leaders are alike - and there is nothing TO like. Maybe the orange ogre figures since he's gotten away with so many lies, why not go for the bald-faced ones during crunch-time? Or, maybe he thinks turning the corner is when over fifty percent of the population has the virus? I dunno. All I do know is... I want my united states the way I like my skies - Blue. Happy Frankenstein Friday.

I feel as if our entire nation his holding its breath.

I don't understand...I really don't. I would love to have a civil conversation with someone drinking this Kool Aid, because I would like to comprehend the mindset behind all of this.

I too was hopeful that the record numbers coming out to vote was because people woke up. However, you may be right, it may be to keep everything the same (status quo).

I am hopeful, but I'm also mentally prepared.