Just When I Needed You Most 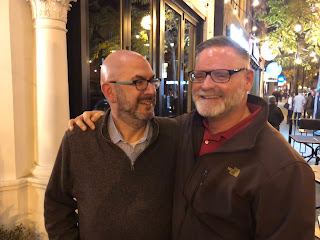 Sometimes your friends just come through - even if they don't necessarily know it.

Yesterday, my work day started off badly. Not in terms of busyness, but an email that really REALLY irked me.

The email became two or three more, which really ground my gears and got my panties into a wad.  ....and they were in a wad.

As I was stewing on that, my phone rang - the personal cellular kind, not my office kind.

It was my friend Doug, from Chicago (seen here). I picked up immediately.

Doug immediately launches into a story of how he went to take out the trash two days in a row and each time saw a rat (I think that's what he said, as he holds the phone far too close to his mouth) and screamed "like a 12 year old girl"...............and then his immediate thought was, "if Blobby had seen this, he would have died laughing making fun of me" {he was not wrong on this}.

His second thought was, he hadn't talked to me in a few months, so he just dialed.

I am so glad he did.

In the world of smart phones, it is all too easy to text - and I'm horribly guilty of that. I do speak to my core group every week, but the close folks with whom I've cultivated long time friendships, you now, it's just easier to SMS them. .....and them me.

Phone conversations are going the way of the written letter.

We had a fun and funny conversation - not just about the rat siting (which was probably a tiny mouse), but we discussed friends, music, his job, his husband.  We started down the political road, but we were both smart enough to douse that early on. That's too much at 08:30.

Still, I told him he called me at exactly the right time. And it was.

While he didn't get me out of my funk - he did for the time we were on the phone. ....and I thanked him for that.

*I'm betting other than Morty, no one could have guessed that artist...........including Randy's mother.

I have two friends I count on every day. They always come through in some way. I think I do for them!

I knew it... and all I had read was the title of your post. I remember the album cover sitting in the cut out bins, as it was his only hit. It was one of those warm fuzzy songs - Stephen Bishop was another artist emerging at the time... so I have rather fond memories of that song. You're right about text messages... I cop out all the time and use them because I don't want to actually take the time for an extended back and forth. Text messages assure that everyone gets right to the point. I like succinct. But see why a phone conversation is much more personal. Thanks for the post.

that is a lovely photo. It gave me a smile.