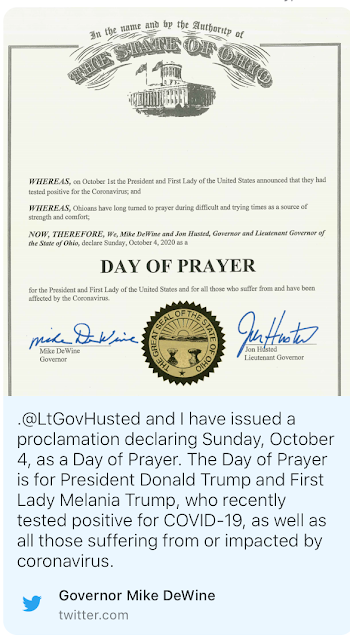 This was just days after our "fearless" governor tweeted this pile of bullshit.

He is a career politician. I'm guessing able to do nothing but to put food on his table.

In that 40+ years of 'serving the people' he has - in my mind - had seven good weeks of public service. And those would have been in March - May 2020.

I'd argue, save Andrew Cuomo, no other governor was more proactive and visible (in a good way) than DeWine, seemingly doing everything right....................until he didn't.

DeWine caved when it came to making, opening things up and releasing data tracking of school Covid positive testing. He became what he has always been in his 40+ years (minus seven weeks): weak.

Listen, I didn't watch the debates, but it sounds like anyone there, watching or hearing about them - from all angles - it was a train wreck.  So DeWine's two lips were firmly planted on BLOTUS' shitter (there were nicer ways of saying that, but I'm beyond being 'nice'). I mean, what kind of fucking tweet is that? You don't have to be derogatory - just don't send any tweet.

But the Day of Prayer.  OMFG.

First off - as far as I know, we, as a state, have never had one, so.......I'm calling BS on this from the start. Let alone the first recipients to whom it is presented.

Yet you get one soul sucking / country destroying "president" with it {ALLEGEDLY! - as I still think it is a tactic (and working too!) to distract from his tax evasion narrative}, and now you send out shit like this.

Forget kissing the ass anymore Mike. Just eat the turd that comes out of his ass already, because that is the next step, right?

I'm still trying to figure out what job in BLOTUS' potential new administration this guy wants. Clearly he hasn't been paying attention. All of them are extremely temporary jobs.  But have at it Mike.

You are a disgrace.

a play for the evilgelical base again. and what a fucking suck-up! and dewine needs to lose those blue frame glasses.

prayer is for the weak and stupid to look like they are going good; it's a sham.

Well, I live in Florida so governors haven’t been helpers since Jeb Bushes first term started. Suck my Dick seems like a good thing , he seems like he’s already done a few to stay in politics. I like Sherrod Brown, hope he offers some balance!

Alison Krauss is a little upset with your right now. (Naw, kidding - I get it). Still, linking her sweet vox to the orange ogre and his minions? I hear what you're saying, though. Hey, remember separation of church and state? Yeah. No Republican in office seems to remember that one. Disgusting. What about the atheists? You either represent all the people or... don't run at all. And praising the orange ogre's performance at the first debate? What is this? Kindergarten? Because that's how he behaved. It was sandbox time from note one. If there is any fairness left in the world, the orange ogre will soon go away. But in the meantime... praying for him as demanded by a political proclamation? Yeah, you are absolutely right. Dude needs to eat shit!

He's infected his own white house with COVID and now he is hopped up on steroids and gone completely around the bend. If the results were not so tragic, this would be entertaining. As he goes further and further off the rails, it gets a lot easier to debunk the flimsy defenses thrown up by his cult.