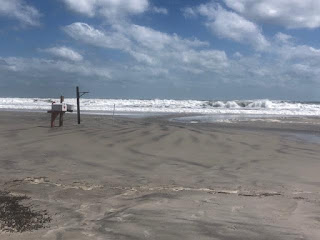 I haven't written about vacation - sure, it's a month late, but would you really want to hear me prattle on about our newest SOCTUS member?

Yeah. I thought not.

For starters. No video for you. I started to. I tried. But my heart and mind weren't in that creative space.

We started in DC. We stopped at 710's hometown, which isn't our normal route to North Carolina, but going via DC only added like 50 minutes to the trip. So we stayed the night in our nation's capital.

The place was deserted. We rented bikes and rode down Constitution with nary a car to be seen. The hotel was fairly dead. No museums open. The outdoor monuments you could visit, but indoors were not an option - not that we wanted to. ....and that afternoon, RBG died. So, we got off on the wrong foot - though we did stop by the Court itself the next morning.

North Carolina beaches in off season are a little different, but we knew that and it was by design. I mean: 2020.

Normally the beach would be greatly empty. Bonus.  But with a hurricane right after we left last year and another one two months before going, left them with very little beach, unless it was low tide. At high tide, there were places where the beach no longer existed.

The weather was cooler than July or August. Due to a gulf storm, we got residual winds. We couldn't even think of going in the ocean for the first four days. So rough, there weren't even any surfers.

The new place we rented was nice. In someways better than the last, in some ways not. But with no chance of eating out, we cooked, or got carry-out. The Shark Bar had the best set up for carry out that I've seen during Covid. And the Texas Tots were AMAZING.   .....even better, it was a block away, and waking there and back whilst drunk we a breeze.

Oh yes. Wine on the porch nightly and no car keys.

So it was a lot of walking the beach  - sometimes 15 miles per day......barefoot.  And my feet were feeling it after a while. But it was nice to get away. I logged into work once. And only once. That was once more than 710 did. Good for him.

This was not our planned vacation, but again: 2020.   Nothing has gone as planned. Nothing.

The trip through Pennsylvania, I thought was frightening with the amount of BLOTUS signs. DC and NoVA was a brief respite. The rest of Virginia and North Carolina were nothing but BLOTUS banners, flags and billboards. They didn't even bother with "yard signs".  Ditto with West Virginia on the way home.

And save for service workers - especially on the way home - no one, and I mean NO one, wore masks....save 710 and myself.

It was essential for our well being to go somewhere and do something, but it was not the end-all / be-all vacation..........except for the Texas Tots.

I see you didn’t call in but once,710 not at all! Too bad you couldn’t fly privately and skip all those signs!

you went thru the pennsyltucky part of PA, where the ignorants live and breed. that restaurant in NC looks fabu.

Well, at least you got away. And the beach! How sweet. Here in Minneapolis? There are about four orange ogre signs... total. Nothing but Biden/Harris as far as the eye can see (which isn't much these days, I'm afraid). Sticking to home. But the metro has to turn out in huge numbers, because rural MN? Azzhats for the azzhat. When I hear tales like yours, about orange ogre signs... I have a tiny panic attack. Thank goodness there's wine! For my whine!