Elephant in the Room

I suppose it is not surprising that voters choose party over country - yet it is still disheartening as hell.

2020 especially that this would occur.

Clearly, I do not get this BLOTUS / Mob mentality. I didn't get the Jim Jones / Guyana thing either but.......I'm assuming this is headed the same place. Covid may or may not be "the" kool-aid, but best case scenario, it's BLOTUS' test balloon.

I truly have tried to stay away from most news. It's a double-edged sword, of course. I read the Cleveland Plain Dealer, but it's hardly 'news'. Locally, it's a bunch of crafted and rejiggered public relation announcements that they make into 'news'.  Or the arts / architecture guy who uses 10,000 words when he should be using 350.

So, for that paper, I skim, until I can get to Dear Abby.

Yet, this caught my eye.

BLOTUS and Pappy Joe are close in Ohio, with the former slightly leading. Again, disheartening, but not surprising.  But the Plain Dealer ran polls from Baldwin Wallace College about Ohio and three other mid-west battleground states:  Pennsylvania, Michigan and Wisconsin. 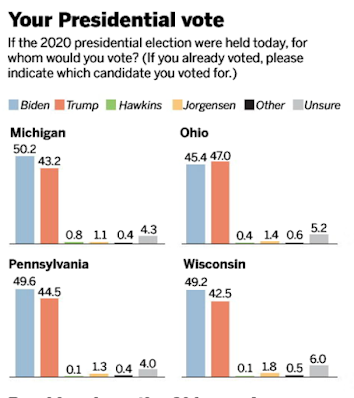 So first off - yay Pennsylvania, Michigan and Wisconsin. I suppose we have chance with that 5.2% unsure number. But it's not likely.

This, however, really caught my eye. And really pissed me off. 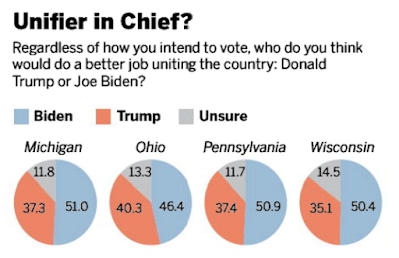 Even in Ohio, and not by a small number, folks who would be voting for BLOTUS think Pappy Joe would do a better job.

Ponder that for a moment, if you will.

This distresses me to no end. Though even news shows will say that BLOTUS brings has the 'economy' thing in his corner?  REALLY?

When he was hospitalized with Covid, a little piece of the news went unnoticed: the trade deficit - which BLOTUS had said was a priority - reached its highest level in 14 years. So......that's not working. Unemployment?  Still frickin' high. First quarter of 2020 was the worst one on record - economics wise. So.......he has the stock market?  Which is NOT the economy.  So what gives with voting for him?

I was relaying this later that morning to my cousin. And honestly, he said something that I had not really considered. Yes, I get the racist leaning of this party during this time. They can claim differently, but I think it is undeniable. Even if "they" are not "racist", they support someone who is.

But David said, and I'm paraphrasing: they know this is the last grasp on white (males?) being the majority.

Clouds parted. Bells rang. Lightbulbs went off. And then the voice in my head went, "duh!".

That's it.  I think that is it totally.

....but I'm susceptible to logical though, so I might totally change my mind next week. But at least I have the capacity to change, unlike some lemmings I'm seeing.

the "unsures" in the last graph are troubling. how can they NOT see that uncle joe is the better choice here?

this house voted str8 blue. and we have more women running for local offices than ever before.

Maybe your polls from your paper are what you’re focused on . My house we have two votes. I have maxed out money I’m giving Biden and Senate Candidates. I’ve recruited one hundred Democratic registrations. Early voting in person begins October 19 ,by October 21 we will have voted after the crowd dissipates. I’ve done all I can! All the polls don’t read like yours , that’s what I’m counting on !

I read a headline recently (why read the article?) that said the orange ogre had achieved the rare three times failed - deficit, unemployment, and what is the third indicator? Anyway... not since the great depression, blah, blah, blah. As I follow it, the stock market has been hella unstable. A chart for my company stock bounces like a super ball. So, I don't think he really has that feather in his cap. As for polls - naw. They lied in 2016. So I hold no stock in them. Once fooled... never again. Would be nice to swing those states, though. Chin up.