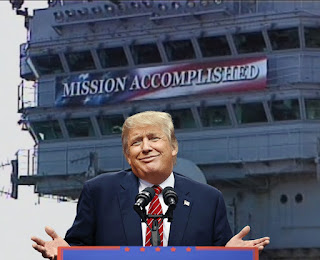 HE has defeated ISIS.  Mission Accomplished!!!

Of course, by his own timeline, he's behind schedule by about roughly 690 days.

Back on the campaign trail, BLOTUS oft mentioned there were generals who didn't understand ISIS like he did.  Apparently, he finally hired some generals who do....or he finally got around to telling the Pentagon all about his super secret plan.

Oh oh oh - and it seems, in BLOTUS' mind,  ISIS is only in Syria. Or that's the only place we've "won" against their evil ways??

Mind you, the Pentagon seems to believe differently. But the Weak and Powerless Oz has prattled.  He is taking troops out of Syria - and to paraphrase, "let the other guys worry about it now".

And IF we defeated ISIS in Syria, why is there still a travel ban to the U.S. from Syria.   Riddle me that!

Here is what BLOTUS did:  no one is talking Michael Flynn today.  Collusion. Or a dissolved Trust and possible state charges with which he can't pardon his problems away.

Yes, BLOTUS changed the news cycle. And yet not one person in the new cycle is remotely aware of it.

He can gripe about the press all he wants, but they're doing his dirty work for him.

miss lindseybelle is ripping the dump a new one on this stunt. all for show.

Indeed: the press states they are outraged but the glue to him for the sake of sales.