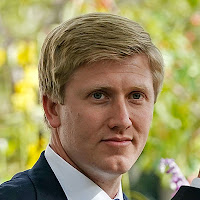 I don't know if it is a good or bad thing that an Aryan actually turned down the job in this White House.

Did Nick Ayers not find the BLOTUS administration not Nazi-like enough, or was even he freaked out by how evil all the inhabitants of 1600 currently are?

Ayers says he wants to move his family out of Washington and back home..........which I'm guessing is Third Reichville.  They'll take the train, as they're always on time.

Seriously (though I wasn't not being serious before), this is a man who was Pence's butt boy (possibly literally), and even he's getting the hell out of Dodge.

You kind of have to wonder what he and John Kelly know. Two chiefs of staff leaving at the same time. As Mueller beings to wrap up his investigation. As indictments might start to roll out.

Sure, he's an evil SOB, I mean, why else would you be in that role? But in theory - and it IS only theory - he is a man who likes order. That he made it this far in something so dysfunctional is beyond me. And for all his probable evil, he probably thinks the man in the oval office is a different, stupid moron, kind of evil.

Social media is all a twitter (pun intended) about what is coming down the pike from Mueller. I'm still not convinced.

Federal charges are nice. Would be nice. Could be.  State charges are better - as the president cannot pardon those.

ayres can't stand the fact that DC's population is mostly POC? all the rats are deserting the ship.

I wonder if he's turning tail, and not in the way Michael Elisabeth Pence might like, and running because people might begin to wonder about their oh-so-close-don't-tell-Mother relationship.