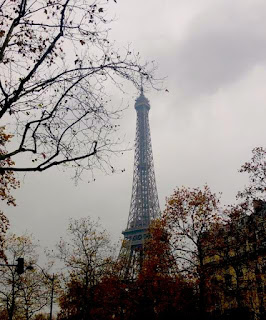 "My friend went to Paris and even if it rains there; going somewhere is better than nowhere"

So sang / wrote Lori Carson back in 1995 on the title track from her where it goes album.

For our time in Paris, I'm not sure truer words could have been spoken / sung.

It rained and it snowed, and we still had a faboo time.


Nothing against Amsterdam or London, but I loved Paris.  WE loved Paris, and that part shocks me.

While 710 says now Paris was always on his list, I think it was much higher up on mine. But days after being back, he just marvels at how much he liked it.

The EuroStar was nice. Decent seats, good service, and the smoothest train ride I've ever had. Acela is like a steam locomotive compared to this. 710 upgraded the car, so maybe that helped. I didn't really see the rest of the train other than our car.  The time flew too - less than 2.5 hours. I swear it took us longer in the cab queue than the train itself - including customs.

....and we got to leave from St Pancras. 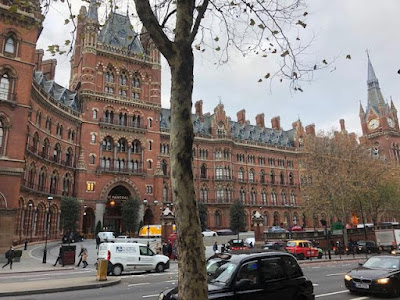 While it is next to (adjoins?) Kings Cross, though Harry Potter uses the exterior here where students catch the Hogwart's Express.

Driving through Paris was wonderful....mostly because I didn't have to do the driving. The hotel, like all of them, was small, but our room was nice. We (i.e. 710) booked the suite, so it was the top floor with a balcony.  It'd be nicer in better weather as we only went out there once.....and I waved to the folks working in the Chanel and Ikea corporate office......and they back.

I retained more of my high school and college French and I ever thought I would. Make no mistake, Blobby wasn't holding any real conversations, but I can read enough to get by. I can say enough to be understood - even if not always technically correct. What I can't do it pick up a lot of it when someone is speaking. I'm sure it's my imagination, but it is always so fast. I'm just trying to pick up enough words to get it.

Still most spoke English, but we tried.

When we knew we were going, the first thing I did was go on-line and get tickets to the Eiffel Tower. Anything else we would probably work around. That one?  Probably not.  And I was right. And I paid extra to skip the lines. 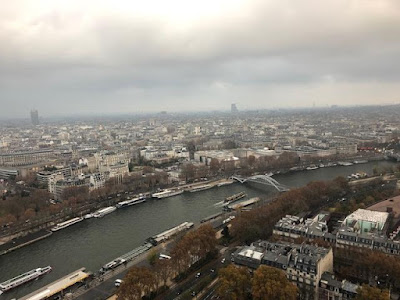 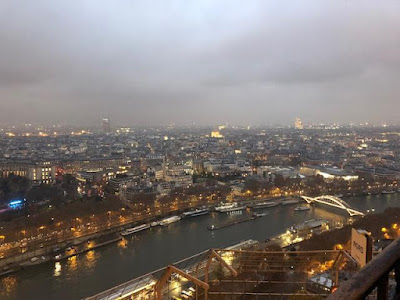 It rained a little (not enough for an umbrella) and it snowed (not enough to stick), but it was cold and wet enough not to climb the 1600-ish steps up to the first platform.  We elevator'd it to the second platform. Before we even started, they said due to weather the top was closed and we could get refunded for that part of the price. Yet once we got to the 2nd platform they had reopened the top.

The view from the second platform might have been better than the top, but both were impressive. And we never got the promised champagne at the top.  Fuckers!

Checking U.S. time, we FaceTimed my mother from the top of the tower. She was thrilled. It was dusk, but she could see everything. I am SUCH a good son!

We walked everywhere - averaging about 13 miles per day. We tried not to be complete tourists, but you know.....when in Rome.....ummmm....Paris.

The Musée d'Orsay was my wanna see musée, but even with tickets, it was a 90 minute wait to get in. As if! We by-passed thinking another day - one that never came.

We walked the Champs-Élysées and saw the arch....which you saw in the video.

We walked to and up (kind of) Montmartre. It's a great little area. We didn't go into the church because, well.....church. I have no need for them, or them for moi.  We saved that for Notre Dame - which wasn't even on my list. I'm not a religious man, but the selfies and posed pictures people were taking were so.............inappropriate.  I don't mean, dick-out inappropriate, but more in a sacrilegious kind of way.

On a rare outing by my lonesome, I took the Metro (oo-oooo) to Cimetière du Père-Lachaise. I know the draw for the 'Muricans is Jim Morrison's grave, and yeah, I saw it (I was the youngest one around), but I wanted to see Wilde, Callas, Colette, Proust (as if anyone has actually read his stuff), Molière, and of course, Fred. 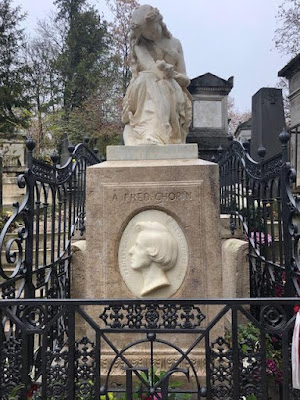 The cemetery was great. I literally did get lost in there, finally having to pull out my phone to get directions out. I had no map, so did not really know where I was going and for the most part stumbled upon some of them - like Chopin and Balzac. When in doubt just find a group, they're the prepared ones. I didn't want to be.

The last afternoon we did head to Musée du Louvre. The Mona Lisa and all weren't really on my list either, but......it's hard to avoid too. All their signs point towards it. Though I didn't know they had Venus de Milo.  But they have a lot. 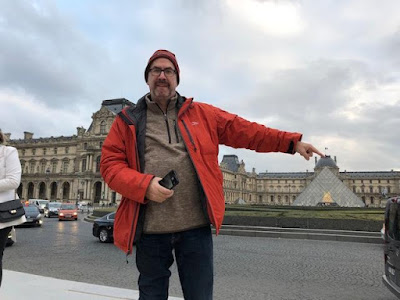 The Louvre displays more than 35,000 pieces of art. I heard if you look at each piece for seven seconds it would take you nine months to get through it. I've tried to replicate the math and that doesn't seem to come out. Still you'd have a wicked case of musée fatigué.

I honestly had not idea how huge the place was. It was quite impressive.

The rest of the time, we just walked around the districts and looked. Until we were up in the Eiffel Tower I had zero idea that Paris has a more modern downtown with skyscrapers.  Who knew?

The food was excellent. We had one bad meal, but the rest were great. I always went in to it not being "that hungry".  I never left a scrap on any plate.

Now that we have done most of the touristy things, we'd both like to come back and do none of them and just wander and hang.

Totally amazed how much we both liked the city. While we won't return immediately, as there are other places to see (Malta?), it's on a short list for which to come back.

Glad you had such a good time. I love it there. It feels like a second home, although I could never afford to actually live there now. I was a poor student there for a year back in the olden days. But, these days I get to live 3 hours away (2 by train!!) and visit from time to time.

In those years when I had money and could criss-cross Europe, Paris was my choice of favourite city. And it still could well be, though I haven't had the chance to return there since 1990.
The best high view of Paris is (or was) from the top of Montparnasse - a big plus being that from there you can actually see a vista including La Tour Eiffel, which you clearly can't from the tower itself.
In Pere LaChaise there's also the grave of Edith Piaf (another one that's popular with the gays) - oh, and for the record, I HAVE read 'A la Recherche...' no less than THREE times (so far). Yes, all seven books. (There's always one, n'est-ce pas?) I'd so like to read the whole lot in francais but I don't think I'll live long enough to complete the task. Quel dommage!

I went to paris in 1970 with my high school french group. I see it hasn't changed a bit. like you, I can still read french. speaking, however...rough, perhaps passable. zut alors!

I have been to Paris twice, loved it both times, can't wait to go back. The d"Orsay is amazing, we went there on Christmas eve about 14 years ago - gives you a reason to go back.

Ahhh.....As you know, I have mixed emotions about Paris. On one hand, it has gorgeous sights and history, on the other hand it’s dirty and smelly. I am glad you enjoyed it so much and saw the beauty, and enjoyed the food. Let us know when you want to go to Malta....would definitely join you as it is tops on our list.

THAT would be so cool no longer Other Brett .

We went to Paris at exactly the same time of year (1st week of Dec) for my birthday in 2013. It was lovely because all the Christmas decorations were out. We had a similar experience to yours, being unprepared for just how much we'd like it. I mean, even in the winter the city is absolutely beautiful. The buildings, the parks, the gardens, the museums, the cafes - everything is just lovely. I'm so glad you had a wonderful time!! And you ARE a good son. ;-)