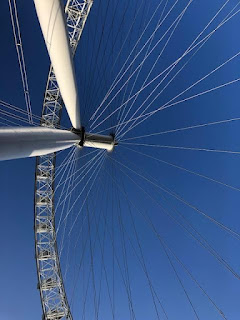 Our transition from Amsterdam to London was not carefree. At all.

Up well before the crack of dawn, to take the train to the airport (after walking to the train station).  Nothing is in English on the signs, but we managed to pick the correct train to Schiphol (yeah, I can't pronounce it either).  Halfway through the ride the train stops and we are told (or make out) due to construction we will have to take a bus the rest of the way.  WTF!

We just followed everyone else with suitcases and made our way. Customs and security are much easier here than the U.S.

EasyJet is anything but. Greyhound would have been better. First - one carry on.  Fine. But they mean one!  If you have a suitcase and a purse, the purse must go into the suitcase.  No laptop bags and a suitcase. So we were pulled to the side and told to make everything fit into one (each).  I couldn't do it with my extra pair of shoes. The gate agent told me to hold them on my lap.  UGH!

On the plane, I was told I couldn't put them under the seat or have them on my laps and had to pack them. UGH!!!!!   The flight attendants sold jewelry on board and collected for breast cancer research. They did not serve drinks as I recall.  As we were landing the less bitchy one announces the Gatwick Express isn't running today.  FUCK.

The only upshot of taking the other trains is that they take ApplePay. So why hundreds of people were clamouring for machines to buy a ticket, we just swiped and went. And I'll give this to London - ApplePay is widespread.  All these folks who say you need coins for the bathrooms (ugh!), didn't go at the right time or have ApplePay.  Ditto with the Underground.  We never actually converted U.S. dollars or Euros to Pounds. Never had to.

The weather couldn't have been more perfect. Blue skies. Sunny. None of that overcats, dampness and rain you hear about Londontown.

We were probably more touristy here than on the rest of our trip. It's difficult not to.

Yes, we went past Westminster, but not in. Only the interments there interest me, but we had to pass it daily as our hotel was right near it.

Yes, we walked to Buckingham Palace. It's just like the Crown says it is. 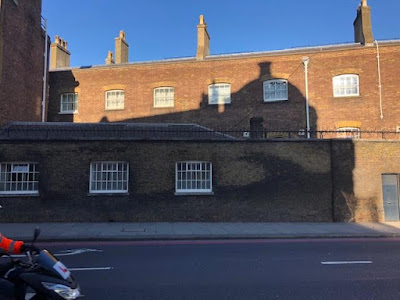 We walked behind it too.  The back of the castle is quite unimpressive. I guess Mr. Bates and Mrs. Padmore have to sleep somewhere. 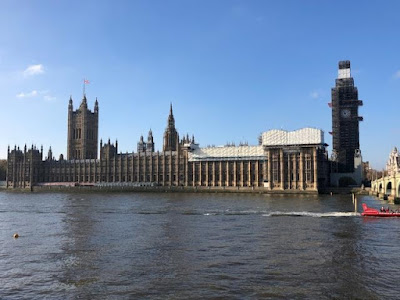 We walked along the Thames too. I don't know if one can go into Parliament, but we didn't even try. 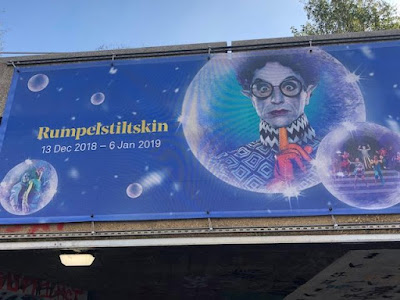 Apparently, there is a new play that is starring possibly Joel Grey playing a woman?  That's my take.

As we walked, we also happened upon the Tate Modern (highly recommended) and the Globe Theater (totally not the original). We crossed the Harry Potter / Millennium Bridge with no interference from Death Eaters. Phew.

This was on the way to the Tower of London. It was the only thing we really wanted to see......well, besides (the Other) Brett. 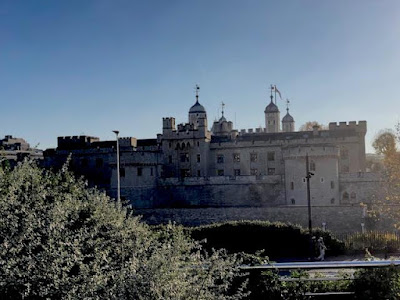 The Tower was well done. I think that was due to our Beefeater tour guide. Yes, you can do self guided, but he was excellent. We didn't wait in line to see the crowned jewels. I think that's what 80% of the folk got on the grounds to see - they didn't do the rest of the tours. 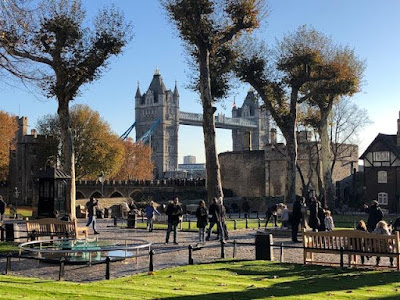 On the way out, you get a good view of London Bridge. It wasn't falling down........falling down. 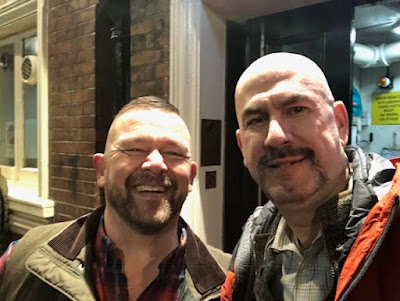 We met for drinks outside a gay bar - which was great and then we went to dinner. Yes, we had a double date. As it turns out, we would spend our actual wedding anniversary with these two.

I knew Brett and I would get along fine - as he and I have exchanged tons of correspondences during parallel job searches - lamenting our failures and celebrating each others successes. He spent time in NE Ohio, so we have some commonalities, and a very similar sense of humour.

What neither of us knew was how easily the four of us would gel. It was like we'd been friends forever. I really really enjoyed our time. We all did. Each mentioned it separately the following day - which was nice.  And how he's reading this getting a big(ger) head.

Of course we saw other things, like Piccadilly Circus and Trafalgar Square. Both decked out for the holidays - as was every city. 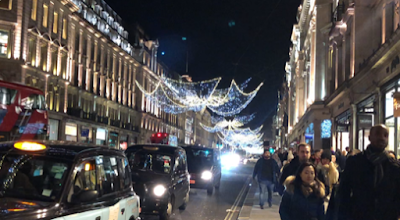 The former where we happened upon a huge protest of something. Labour. Islamaphobia. End the War. Gay Rights. It honestly didn't know what it wanted to be, so it was everything

Our time in London was too too short. I'd have loved 2-3 more days there and getting to meet Brett & Nico's dogs. I would love liked to try to meet JP - but he dreamt up some job out in Manchester, so he "wasn't available".  By my own admission, I didn't think about to reaching out to Raybeard until we were there, and it felt hurried and I didn't want to put anyone in a forced position. Next time.

We had decent food here.

As public transportation goes, I'm not the biggest fan of the Tube, for multiple reasons. Crowds being among them, but the amount of transfers and the number of flights of stairs and walking to do so, seemed endless. I get I only had a few days to try to figure it out, but I could easily get half of my 10,000 daily steps without ever leaving the Underground.......for one ride.

I can't really complain about the stations or trains themselves. All seemed fairly clean.

We will get back to London (and hopefully Scotland and Wales), and I'm looking forward to the next time.   .....just not via EasyJet.

That's actually Tower Bridge, B. The 'real' London Bridge, the one that was falling down, was dismantled, shipped over and reassembled in Arizona. (It hardly needs saying that there are any number of other bridges in London - so I won't!)

Oh, and although you yourself didn't refer to 'Big Ben', which many people think is the clock though it's actually the bell that sounds the gongs on the hour, the tower which houses the whole contraption was re-christened in 2012 to honour Her Maj on her Diamond Jubilee, and is now known as the 'Elizabeth Tower' (formerly St Stephen's Tower). Here endeth the lesson.

I've been schooled by Raybeard.......and rightfully so. But way to blow the 'falling down' joke / reference.

thank you, king raybeard; I just learned something new.

and I would love to meet JP and eat at guido's restaurant and meet king raybeard too!