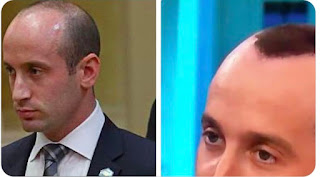 I think I'm well positioned to make fun of the balding population. I have an extreme amount of street crud on this subject.

Clearly, Steven Miller has issues. Many of them, I might add.  One of them does not seem to be 'embarrassment'.

How sad to be that insecure with your looks and your lack of hairline that you actually spray one on, or worse, implant it, where it works exponentially less.

This isn't a matter of opinion. It's a matter for fact - alternative or not.

And I am here to tell Steve - or now that he has "hair", Stephan (pronounced: Stef-fhan) - that his going bald was his BEST quality.

There isn't a woman or man alive who is going to find you attractive Steph - with our without the worst Eddie Munster 'do I've ever seen.

No one - and I mean NO ONE - has ever though a comb over or toupee looked good or natural. And whatever the fuck you did to your head? Worse.

I know you were on tv talking about "ooooh, the government shutdown". Scary (until you realize they still pay most of the workers after the fact for not working, so you really spend as much, if not more money than before and get zero productivity - but you forgot to mention all that), but no one will remember that...........just your stupid fucking "hair".

Here's a helpful hint:  if you can't figure out a hair solution for yourself, maybe you shouldn't be making big decisions for anyone else.

"they still pay most of the workers after the fact for not working, so you really spend as much, if not more money than before and get zero productivity" - THIS! working for the guvmint 1980-1999 as a "beltway bandit" demonstrated that we the people are getting screwed by many a fed employee.

miller's mother should have had an abortion. head nazi is FUGLY!