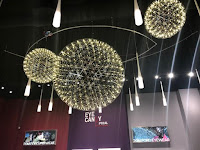 It's nearing the end of a benefit year.  You know what that means:  let's get in every bit of medical care that can be had, as the new deductible season starts in three weeks.

I am just about finished with physical therapy (check). I have my dentist appointment scheduled for right before new year's eve (check).  And I just had my eye exam (check!).

So there's only one thing to do: glasses.

My last pair(s) were two and a half years ago. I remember because I woke up to my brand spanking new pair - the really expensive one - being chewed on by one new little puppy named Shep. Sure, I got the lenses fixed, but the ear piece thingy still has gnaw marks all over them.

I had no idea what I wanted in a frame. I always want something functional but with an edge. I'm not sure those truly exist. I'm not Philip Johnson.  I'm not Lew Wasserman. 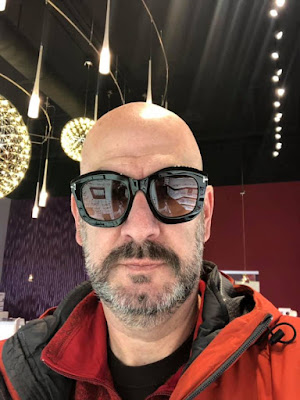 The odd thing is:  I MIGHT be able to pull these off in the right setting. Who cares if they're for an elderly Jewish woman.

I'm never getting my frames at Lenscrafters of Pearle. I'd rather throw my dough at a local independent place.  ....and we have a newer one in town: Eye Candy.

They had some great frames. Sure, they were all wrong for my face and everything, but at least they were different. And it probably says something when my two favourite pair were deemed 'women's' frames. It's not like they have designated areas, so one can't always tell.

The staff took decent care of me and we went through about two dozen frames before I narrowed it down to two.  Both were actually the same frame with different colouring. 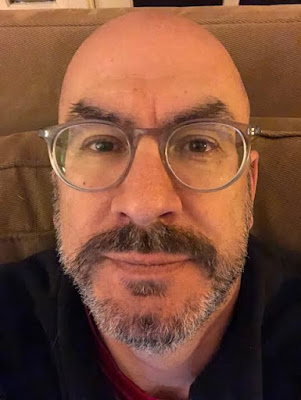 I went with the more clear - but still smokey - version.

Since they do their own work there - no sending it out - if you have a single vision lens (oh, those were the days, no?), they can make the lenses in seven minutes!    That that, fucking Lenscrafters - in an hour!

Even most places take 7-10 days for my more complicated script, and they said it would take a week. I got them in five. I could have gotten them a day earlier if I were in the mood to leave work to get them. 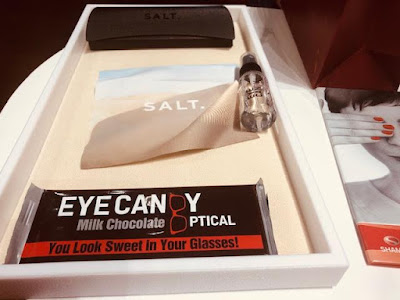 Don't get me wrong, it turns out to be one fucking expensive chocolate bar, but as the owner said - you can't be called "eye candy" without giving away candy.

I like the black one's. I am waiting for my new progressives to come in, spent the last penny of the flex dollars this year.

I like the first pix better. never heard of "eye candy" stores around here, but I DO know where to go looking for some sweet eye candy...

Funny story, many years ago our friend was visiting with a new baby and our beagle Jordan kept sniffing the baby, so we put her in our bedroom and closed the door. Jordan, who had never been destructive EVER, got my glasses off the nightstand and chewed them up. "Nobody puts Baby in the bedroom!"