Before going abroad, I thought it be wise to download a translation app.  Sure there are a number of them out there to convert words, but none so slick at Google Translate.

The idea is that you aim your phone - after the app is activated - point it at the word or phrase you'd like translate.  You turn on the camera and it puts the English words right in for you.

There are dozens of languages from which to translate to.....or from.  Something like this..... 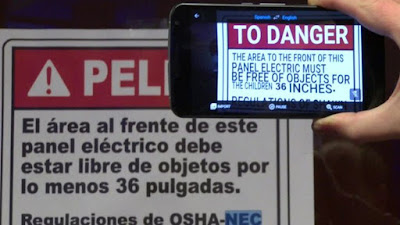 Honestly, we didn't really use it, except at the train station in Amsterdam.  There isn't much in the Netherlands that remotely translates.......or that doesn't looks like an unfinished game of Boogle.

The one time we used it - it failed.  It couldn't seem to focus on the board at the station, but to be fair, it was electronic, so maybe the movement fucks stuff up.

On the trials we did at home, it worked flawlessly.

The app is free, so you're not shelling big bucks out for it - but the app is solid and slick and you can probably do some educational things with it in terms of helping you master another language.
Posted by Blobby at 12:09 AM

If only it would translate "English"to English. I have used it, it came in handy in Germany.

Holy cow. That app still feels like magic to me, even though the translations are imperfect.

wow! this one looks quite useful !