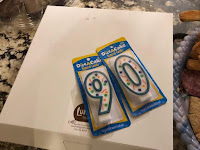 I'd say it's a big feat - and it is - but with a brother who was 97 and another who made it to 100, I guess in her family 90 is under achieving. Though she has passed both her mother and father's stay here by almost 20 years....so far.

As always, we gathered for her birthday.

I wasn't so sure it would happen. This has always been at my parent's house (my dad's birthday was the day before my mother's).  Clearly, this year would be new.

I reserved a room at her independent living facility. We went back and forth of having it there or at my sister's, who lives nearby.  As she should, my mom made the decision:  my sister's it was. Deep down I worried about that, but said next to nothing - I was trying to appease my mother's limited independence

The evening was nice, but nothing over the top. It takes a lot of energy to get my mom out and about - and then back to her new place again. I know she wants to do these things, but she and us and still gauging her limits - and we don't have it down yet. I fear she overdid it.

We assumed she'd tire out after an hour and we'd be home in two. While my brother-in-law picked her up, 710 and I took her back. With travel time and dinner, it was a five hour outing - something we didn't really plan on Shep being at home alone*.

If I'm being honest, a few times this last year, I wasn't sure she'd make it to 90. I'm pretty sure she felt the same. Of course we were hopeful, as we will for the upcoming year.

*he wasn't alone alone. Sophie was there too.

Song by: Matthew Sweet
Posted by Blobby at 12:10 AM

happy birthday to your mom. yep, longevity runs in your family.

I seeing AM. HB to your mom.

Happy birthday to the lady !

Yeah, and you’ll still be blogging and Ill still be telling you you’re an idiot for getting up at 5am.